Monday #Review - Where I Live by Brenda Rufener #YALit #Contemporary 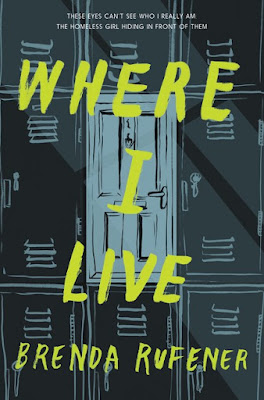 Perfect for fans of Jennifer Niven and Nicola Yoon, Brenda Rufener’s evocative YA debut tells the story of Linden, a homeless teen secretly living in her high school. Together with her makeshift family of friends, Linden struggles against the domestic violence of her past and begins to shape a bright future, in this moving novel about overcoming all odds.


Linden Rose lives with a big secret: She’s homeless and secretly living in the halls of her high school. No one can know her secret. If any adults uncovered the truth, they’d get the authorities involved and derail everything she’s worked for. All she wants is to make it through high school and get into college to fulfill her dreams of becoming a journalist.

Her position as editor of the school’s blog, her best friends Ham and Seung, and the promise of a future far away are what keep Linden under the radar and moving forward. The three outsiders have created a makeshift family, and their jokes and solidarity have become home for Linden. And she’s beginning to hope that with Seung there might be something more than friendship on the horizon. But when cool-girl Bea comes to school with a bloody lip, it hits closer to home than Linden would like to admit. Linden starts looking more closely at Bea’s relationship with her boyfriend, and soon her investigation causes people to pay more attention to Linden’s own dark history. And attention is the last thing she needs.

Linden knows the only way to put a stop to the violence is to tell the story. Even if that means breaking her rules and jeopardizing the secrets she’s worked so hard to keep.

Where I Live is Brenda Rufener’s debut novel. Rufener tells the story of a homeless teen named Linden Rose who has three distinct rules for survival: Rule 1: Prevent in-class naps, Rule 2: Never carry too many belongings, Rule 3: Avoid looking the part. Linden's rules guarantee that no one, not even her best friends who she calls the Triangle, learn that she lives in the halls of their high school, and has been doing so for nearly a year.

She's the lead reporter of the school newspaper, she works at cleaning houses, and she volunteers at a local senior home. Linden's job as a reporter is her hope for the future. A future that includes going to college along with her best friends, Franklin "Ham" Royse, a gay teen, and Seung Rhee, a Korean American and her love interest. Their experiences inform a large part of this novel. While the reader will focus on Linden and her story, don't over look Bea, and the crappiness that she deals with. Yes, she is a mean girl, but nobody deserves to be treated the way she is.

Racism, homophobia, and domestic violence are all present in Linden’s story. Rufener confronts these issues with grace and sensitivity, diving deep into the difficult topics of homelessness and violence against women, making them human and palpable. Linden's background at how she ended up as a homeless teen is emotionally charged and thought provoking, as is her final chapter. The writing is thoughtful and evocative, with dialogue that rings true. Linden is her own kind of teenage hero—what she lacks in superpowers she more than makes up in inner strength and attitude.