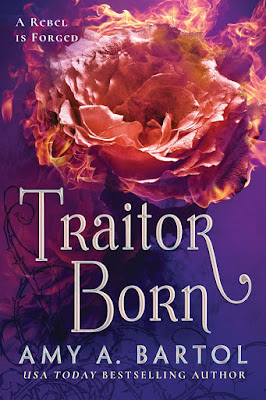 Secondborn Roselle St. Sismode was pressed into military service to battle the rebel uprising threatening the society that enslaves her. Now, powerful factions conspire to subvert the lines of succession, positioning Roselle to replace her mother as leader of the Republic’s armed forces. But the woman who bore her would sooner see Roselle dead than let her usurp her firstborn brother’s command.

The deadly war of intrigue between her new masters and her ruthless family is but one conflict challenging Roselle. A soldier for the rebellion has drawn her into a rogue army’s plot to overthrow the Republic and shatter its brutal caste system. Targeted by assassins and torn between allies, Roselle will have her loyalty, love, and honor tested in the greatest battle of—and for—her life.

Traitor Born is the second installment in author Amy A. Bartol's Secondborn series. The story picks up where Secondborn left off. Protagonist Roselle St. Sismode has found herself in a situation that most likely would make others skittish and run for the hills. She's become a pawn in a political game that has seen Rose become the person of the moment. The Gates of Dawn wants her to break the dreaded Fate system which includes Virtue, Swords, Stars, Atoms, Suns, Diamonds, Moon, Seas, & Stones. The Rose Garden Society wants her to become the Sword ruler replacing her mother who has tried to kill her, as did her own brother who she still supports.

But, nobody has asked Rose what she wants for the her life if she survives all the challenges that are heading straight for her. This is a world that is dominated by Firstborns while Secondborn's are given over to the government to use as they see fit. And, if you are a Thirdborn, you are deemed unnecessary, and are hunted down by a group known as Census. Rose has already faced the Census and Agent Crow. Rose has a strange group of allies including Clarity Bowie, Clifton Salloway, Reykin Winterstorm, and Dune Kodaline. Despite the protection afforded to her by both Rose Garden and Gates of Dawn, danger always seems to find its way to Roselle's doorstep.

Her mother, Othala St. Sismode, is on the warpath and will stop at nothing to remove the threat she sees in Roselle to  her machinations. Census Crow wants Roselle badly. She has found a way to escape him time and time again, but how many times can one person escape from bad situations before her good luck runs out? I'll have to admit that I've become a fan of Roselle's, especially after this book. Rose is not unlike me who gets panic attacks. She's a badass fighter, who gets some pretty cool weapons and outfits, and then gets thrown into the frying pan by the author. Roselle has been a puppet her entire life. As her families Secondborn, everyone has their own agenda for her and their own motivations for treating her certain ways. Roselle doesn't hate her brother. She probably should since he has checked out and hasn't exactly stood up to defend her. Her mother is ruthless, cunning, dangerous, and manipulative. Roselle would be better off just cutting the cord and admitting that were it not for others and her own cunning, she would be dead.

I liked her connection with Reykin which slow develops over the course of the story and then leaves room for more if the author choose to do so. I am saddened to say that there's a brutal cliffhanger ending to this book. But, I am happy to say that the author throws a really wicked cool scene where all hell breaks loose. No spoilers. The author is diabolical. Seriously. I literally gasped at what the author puts Roselle and allies through. And, if that weren't enough, she leaves a preview of the third installment that will linger with you until Rebel Born is released in 2019. Traitor Born is an action packed story filled with twists, and surprises, and emotionally charged scenes. If you haven't read the first book yet, what are you waiting for? 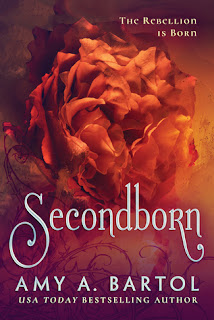