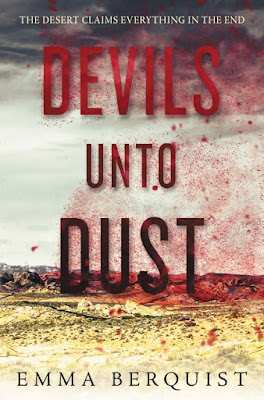 
True Grit meets 28 Days Later in a tense, heart-pounding alternate history of the Old West. To protect her family, a young woman must brave the desert and a terrifying infected population in this gripping adventure that is for fans of Westworld and The Walking Dead.

Ten years ago, a horrifying disease began spreading across the West Texas desert. Infected people—shakes—attacked the living and created havoc and destruction. No one has ever survived the infection. Daisy Wilcox, known as Willie, has been protecting her siblings within the relatively safe walls of Glory, Texas. When Willie’s good-for-nothing father steals a fortune from one of the most dangerous shake-hunters in town, she finds herself on the hook for his debt. With two hunters, including the gruff and handsome Ben, to accompany her, she sets out across the desert in search of her father. But the desert is not kind to travelers, and not everyone will pass through alive.

Devils Unto Dust, by author Emma Berquist, is a Young Adult, Dystopian, Western standalone novel. Devils Unto Dust takes place in an alternative history reality right after the Civil War ended. Ten years ago, a disease spread across the West Texas desert and those infected – known as the Shakes – attacked the living and wreaked havoc. Parts of Texas have been cut off from the rest of the country thanks to a silver sickness. In fact, the rest of the country has pretty much left Texas to its own devices.

Protagonist Willy "Don't call me Daisy" Wilcox and her family lives in Glory, Texas behind walls that keep the residents safe from the Shakes. Willie is an amazing character. She has three siblings (Micah, Catherine & Calum) that she has taken responsibility for since her mother was infected, and her dad mailed in his responsibility for his own children's welfare. But, Willie has dreams of her own. She doesn't want to be locked up behind walls for the rest of her life. Unfortunately, life throws her a fast ball right down her strike zone.

After her father hightails it out of Glory with a whole lot of money, Willie finds herself allied with a pair of brothers who are also hunters; Curtis and Ben Garrett. Given a deadline to bring her father back or pay the cost and most likely lose everything they have left, Willie, Curtis, Ben, along with Micah, her brother, and Sam, son of the local doctor, travel across a dangerous landscape hoping to catch her father and bring him back. The author really digs deep to provide a realistic story against a harsh environment. There is also a hint of a romance, but nothing that overshadows Willie's own personal struggles.

Dust Unto Dust is a story about survival, family, and the struggle to survive against all odds. There are tense, short chapters that end on cliffhangers which propels readers from one action-packed scene to the next. Willie’s distinctive, introspective voice deepens the emotional stakes with every turn of the page. The author manages to excel at creating a realistic world (Texas) that captures the heat and dust of the Texas desert. High concept and character-driven, Emma Berquist’s debut will satisfy fans of The Magnificent Seven, Rae Carson’s Walk on Earth a Stranger, and HBO’s Westworld.