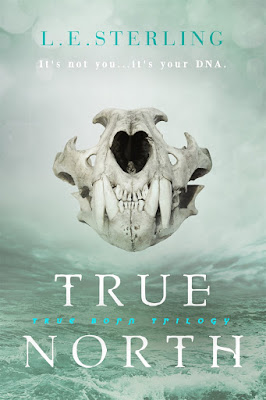 It’s not you…it’s your DNA.Abandoned by her family in Plague-ridden Dominion City, eighteen-year-old Lucy Fox has no choice but to rely upon the kindness of the True Borns, a renegade group of genetically enhanced humans, to save her twin sister, Margot.But Nolan Storm, their mysterious leader, has his own agenda. When Storm backtracks on his promise to rescue Margot, Lucy takes her fate into her own hands and sets off for Russia with her True Born bodyguard and maybe-something-more, the lethal yet beautiful Jared Price. In Russia, there’s been whispered rumors of Plague Cure.While Lucy fights her magnetic attraction to Jared, anxious that his loyalty to Storm will hurt her chances of finding her sister, they quickly discover that not all is as it appears…and discovering the secrets contained in the Fox sisters’ blood before they wind up dead is just the beginning.As they say in Dominion, sometimes it’s not you…it’s your DNA.

True North, by author L.E. Sterling, is the second installment in the authors True Born trilogy. The story picks up four months after the ending of True Born which introduced readers to a dystopian world where a major plague tore through the world creating three separate but unequal factions: Splicers, Lasters, and True Born. Splicers are those who are able to have DNA treatments to lengthen their lives; Lasters are those who have been infected with the plague, and whose days are numbered; True Born's are those who are not affected by the plague thanks to some evolutionary advantage.

The protagonist of the series is 18-year old Lucinda (Lucy) Fox who, last we saw her, had her world upturned and has no clue what her reveal was supposed to show her. Everyone in this world is supposed to know what they are before the age of 18. Lucy's reveal was destroyed by a radical sect of Lasters.  Lucy was born identical and conjoined with her sister Margot Fox. Margot has been missing for the past 4 months along with her parents and a Russian oligarch who wanted both sisters. Lucy and Margot have an interesting connection as well. They can both feel what the other feels.

We once again return to the fictional city of Dominion, but we won't be there the entire series. This time, the author takes Lucy for a little ride. With her world in ashes and her twin sister Margot carried off to Russia, Lucy has no choice but to rely upon the kindness of her True Born friends. But Nolan Storm, mysterious leader of the True Born's, has his own agenda: by leveraging Lucy’s connections, he intends to infiltrate the powerful Upper Circle. When Storm backtracks on his promise to rescue Margot, Lucy takes her fate into her own hands.

With the help of a new but mysterious friend, Alastair, and one spitting mad True Born bodyguard, Jared Price, who is his own world of complications; Lucy sets off for Russia, with its whispered rumors of Plague Cure and an introduction to a group known as the GILT who may have the money to remake the the world to before the plague. When Lucy and her friends arrive on the new shore, the trio discovers not all is as it appears. Things are truly bleak and it appears as though Lucy is being hunted. As they say in Dominion, sometimes it’s not who you are. It’s what's in your DNA.

This book is NOT a standalone. You must have some sense of where the story has been so that you can know where the author takes her characters from here. You can also expect a kind of cliffhanger ending to the story. There is lots, and lots of unanswered questions. Questions that I am hoping that the author reveals in the third and final installment called True Storm. I need to know about the attraction between Lucy and Jared. Is it animalistic, or is it really true love? Also, Alastair is a character who is very, very intriguing, but we are left with more questions than answers as to why he helps Lucy and seems to be an ally of hers. There is obviously an end game with Nolan Storm. I have some ideas, but let's see what the author has to say about it.