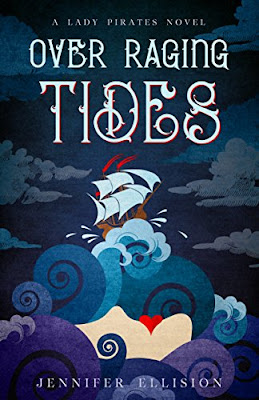 
The pirate crew of the Lady Luck lives by many rules, but chief among them is this: they do not allow men on board.  That’s a rule that quartermaster Grace Porter is willing to break when a shipwrecked young nobleman offers her information of an omniscient map, stolen from his warship by an enemy vessel. Until now, the map was only the stuff of legend… but with its help, Grace may finally be able to hunt down the Mordgris, the sea monsters who stole her mother away from her.  Unfortunately, some members of her crew have other plans...  To find the map and face the Mordgris, Grace will have to confront her past, put the Luck between warring nations, and uncover treachery aboard the ship. And ultimately, her revenge and the destruction of the Mordgris will come at a hefty price: the betrayal of her crew.  Grace promised them they wouldn’t regret this.  She just isn’t sure that she won’t.

Over Raging Tides is the first installment in author Jennifer Ellision's Lady Pirates series. Onboard the Lady Luck, Grace Porter is both Quartermaster and First Mate under Captain Ilene. Onboard the Lady Luck, there are no loyalties to Kings, or Queens. It is also a ship that is filled with women pirates. The twist? "No man shall board this ship." However, after stumbling upon a wrecked warship & searching for treasure, Grace makes the choice to save survivors Leo and his younger brother John from the horrible monsters known as Mordgris.

The reason? Leo claims to know the location of a magical map that is said to be omniscient. The Map of Omna is said to be able to find the precise location of every treasure, every legend, and people who have been lost. Leo believes it is a bargaining chip to keep him and his brother alive. Grace believes it is a way to find the home of the Mordgris. The same Mordgris who were responsible for taking Grace's mother away from her. Mordgris have been haunting and stalking her wearing her mother's face for years.

After spending nearly her entire life onboard, the Lady Luck, Grace may have to do some things she never thought she would do in order to discover whether or not her mother is dead or alive. She may have to break a lot of rules, betray her fellow shipmates, and break hearts to get the revenge she is hunting. She may also have to ignore warnings to stay away from the island where Mordgris call home if she wishes to live another day.

If you haven't already figured out that the author is a huge Pirates of the Caribbean fan, well she pretty much admits it in the credits. This is not a standalone series. You have a clear cliffhanger ending that will lead into the next installment. I shall definitely recommend this story to everyone. Grace is a great lead character, and there are plenty of twists and surprises that await the reader.