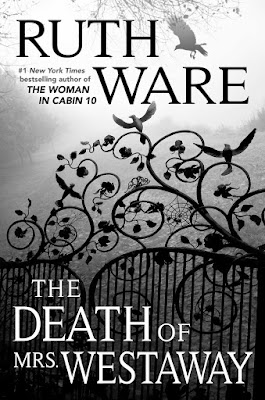 On a day that begins like any other, Hal receives a mysterious letter bequeathing her a substantial inheritance. She realizes very quickly that the letter was sent to the wrong person—but also that the cold-reading skills she’s honed as a tarot card reader might help her claim the money.Soon, Hal finds herself at the funeral of the deceased…where it dawns on her that there is something very, very wrong about this strange situation and the inheritance at the center of it.Full of spellbinding menace and told in Ruth Ware’s signature suspenseful style, this is an unputdownable thriller from the Agatha Christie of our time.

Ruth Ware's The Death of Mrs. Westaway is the author's four novel after In a Dark, Dark Wood, The Woman in Cabin 10, and The Lying Game. This is a story of a dysfunctional family, sibling conflicts and rivalry, intrigue, legacies and buried secrets from the past. 21-year old Hariet aka Hal Westaway is in a bleak financial situation. She is receiving threatening messages, and visits from intimidating strong men because she borrowed money to pay her rent, or to keep the electric on. As a job, Hal uses tarot cards to tell futures of those who believe she is a psychic like her mother.

Hal is apparently really good at reading people, and understanding what they want from her readings. She is also very good at weaving a story out of images. But, it doesn't keep the electric on, or food in her refrigerator. Then things really get interesting. Hal receives a curious letter from a lawyer named Mr. Treswick informing her of a possible substantial bequeath thanks to the passing of a woman named Hester Mary Westaway who is supposed to be Hal's grandmother.

Hal has been told to be skeptical and be doubly skeptical when its something you want to believe. Curious and in desperate financial need and believing she can play the role of a lifetime, she travels to Penzance where meets with the woman's family who she never knew existed. What's even more shocking is the reading of the will. Nope, I shall not spoil that part. I will say that a substantial part of this story takes place at Trepassen House which is just creepy.

Especially the magpies who seem drawn to the place, or the attic bedroom that has some twisted features which, again, I won't spoil, or bars on the window found in an attic bedroom. Hal tries to understand her role in what appears to be a major mistake while also digging into the families past, including her own mothers past. Hal faces hostility from all quarters, especially the elderly, menacing and strange Mrs Warren. Mrs Warren is the housekeeper & it appears that she not only has secrets of her own, but may know all the families darkest secrets. I can say this.

The author actually alternates between 1994 and the present. The past is all about revealing Easter Eggs that will lead you to hopefully figure out what is actually happening in the present. The Westaway's are so discombobulated and distrusting of Hal, that it will be a remarkable turn of things were Hal to live to tell the story to any children she may have in the future. Hal is a flawed character, who you can forgive her deceptions, given the precarious nature of her finances.