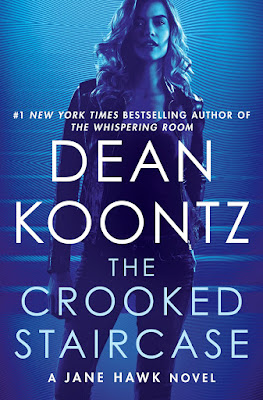 “I could be dead tomorrow. Or something worse than dead.” Jane Hawk knows she may be living on borrowed time. But as long as she’s breathing, she’ll never cease her one-woman war against the terrifying conspiracy that threatens the freedom—and free will—of millions. Battling the strange epidemic of murder-suicides that claimed Jane’s husband, and is escalating across the country, has made the rogue FBI agent a wanted fugitive, relentlessly hunted not only by the government but by the secret cabal behind the plot. Deploying every resource their malign nexus of power and technology commands, Jane’s enemies are determined to see her dead . . . or make her wish she was.Jane’s ruthless pursuers can’t stop her from drawing a bead on her prey: a cunning man with connections in high places, a twisted soul of unspeakable depths with an army of professional killers on call. Propelled by her righteous fury and implacable insistence on justice, Jane will make her way from southern Southern California to the snow-swept slopes of Lake Tahoe to confront head-on the lethal forces arrayed against her. But nothing can prepare her for the chilling truth that awaits when she descends the crooked staircase to the dark and dreadful place where her long nightmare was born.

The Crooked Staircase, by author Dean Koontz, is the third installment in the authors Jane Hawk series. The story is written in alternating, short chapters with differing POVs. FBI agent on the run Jane Hawk, mother of a young son, Travis, grieving widow of a decorated Marine, Nick, has uncovered a terrifying conspiracy behind the death of her husband and scores of other exemplary citizens by suicide and other very public ways. Since then, she's been indicted for espionage, treason, and murder and become the #1 fugitive in the country.

As she wades through the twists and turns and shocking surprises, as well as heart breaking losses, she knows that any day might be her last day alive. Going off the grid to keep all those responsible (Techno-Arcadian's; mostly consisting of politicians, agents of secret/law enforcement agencies, rich business people and techno inventors) off her trail, she knows that she will have to do whatever it takes to bring this cabal to its knees while keeping Travis alive. Travis is her primary mission, exposing the cabal is secondary, staying alive would be third.

The Cabal is looking to take over the world and form some sort of utopia. One way they plan to bring their utopia to bear, is to destroy people with nanotechnology which makes them pliable to certain triggers. These people are picked by a computer algorithm as possible future opponents; basically defined as people who can think and reason for themselves. The author actually inserts two depraved hunters who work for the cabal into the story. They are deeply committed to the cause, and if they can finally catch up to Travis, they can lure Jane to them.

I'm going to say this; my rating is based on how utterly and horribly dark this book is. There is hints of rape, abuse, people losing their minds and their ability to have control over their own actions and doing horrible things. The story truly leaves you with the feeling of being helpless & hopeless to stop the carnage and the twisted machinations of the cabal and those who are working for them. If you are already into this series, you know exactly what I am talking about. The author introduces some villains that could give Kilgrave from the Jessica Jones series a run for his money.

There is an old saying, before you embark on a journey of revenge, dig two graves. It suggests that if you plan on getting revenge, you will destroy not only your enemy but yourself as well. Jane's world is about ready to get a whole lot darker. If Jane survives, will she be able to look her son in the eyes and not have fully immersed herself in the evil's that men do?