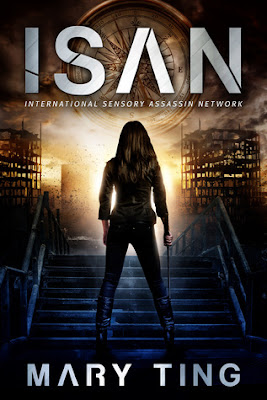 THE WORLD HAS CHANGED. SCIENTISTS WARNED IT WOULD HAPPEN. Meteors devastated the Earth. World Governments developed plans to help surviving citizens. The United States disbanded and salvageable land was divided into our quadrants—North, South, East, and West—governed by The Remnant Council. Struggling to survive, seventeen-year-old Ava ends up in juvenile detention, until she is selected for a new life—with a catch. She must be injected with an experimental serum. The results will be life changing. The serum will make her better. To receive the serum, Ava agrees to join a program controlled by ISAN, the International Sensory Assassin Network. While on a mission, she is abducted by a rebel group led by Rhett and told that not only does she have a history with him, but her entire past is a lie perpetuated by ISAN to ensure her compliance. Unsure of who to trust, Ava must decide if her strangely familiar and handsome captor is her enemy or her savior—and time is running out.

ISAN is the first installment in author Mary Ting's International Sensory Assassin Network series. Protagonist Ava lives in a world where meteors destroyed what was once Planet Earth. In the aftermath, the US was divided into four regions; East, North, South, & West. Each region is overseen by the so called Remnant Council. Remnant Council members are supposedly secret. Then there is the International Sensory Assassin Network (ISAN) who takes in those left in foster care and juvenile detention.

ISAN takes mostly young women like Ava who have no family left and a specific DNA marker. ISAN injects them with a serum called Helix B77 which gives candidates increased abilities like senses, stronger, faster reflexes, and in some cases, ESP. The author hints that these meteors were responsible for enhanced technology and medical care. Ava is a bit different from the others. She's had a rather hard life with the loss of her mother, ending up on the streets, and then being placed in Juvie after trying to survive on the streets.

Ava seems to have the ability to know where she is going as though she has a map in her head. Ava's team includes Brooke, Justine, and Tamara. Make no doubt about it folks.
ISAN, under the leadership of Mr. Novak owns the girls outright. He can do whatever he wants and there won't be any blow back from any government agency. After passing rigorous tests to find out if they are worthy of an outside mission, Ava's team is chosen to assassinate a political figure.

This is when things get curious and interesting. Curious because of the fact that nobody is supposed to know who the Remnant Council members are. Interesting because someone from Ava's past makes contact with her. Ava's team ends up with a second mission. One that ends up with Ava being kidnapped by a boy named Sniper, and his friends Ozzie and Reyna. While among Sniper's group, Ava gets a hint of her past relationship not only with Sniper, but Reyna as well. She also gets some interesting revelations about herself and her family for which I will not spoil.

All good things must be twisted. You know that Ava can't stay with Sniper's group forever. ISAN won't allow their million dollar investment to just walk away scot free. Whatever it takes, Ava needs to do her own investigation. She can't trust anyone. Not even her own teammates. Ava will need to be strong, and be brave if she is to survive against those like Mr. Novak who seems to have his finger in more than one pot. Will Ava's memories reawaken, or will Novak find a way to suppress them in order to keep her as a good little soldier?

This is one of those stories that easily can and should be picked up for a TV series. I hate a hit or miss relationship with this author, but in this case I found the action and the mystery to be intriguing. Unlike other series I've read, I do plan on continuing with this series.