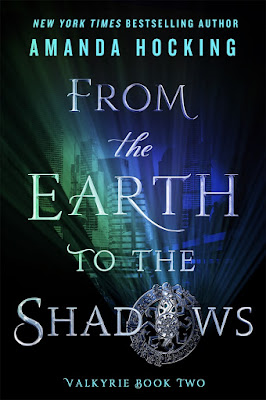 Malin’s mission to avenge her mother's murder has uncovered dangerous secrets. As a Valkyrie-in-training, Malin must slay immortals who’ve had their time, to maintain balance between humans and immortals. But her quest could destroy earth’s stability – and unleash chaos.

Just when she needs to focus, her friend Asher is in grave danger. He’s been dragged into the underworld, where vengeful immortals plot revolution. Malin believes her feelings mustn’t distract from her goal – but is desperate to rescue him. So she ventures into the darkest of realms, knowing she may not survive. With new allies at her side and new enemies ahead, Malin will face terrible choices. She’ll have to keep her head – or be ruled by her heart.

From the Earth to the Shadows is the second and final installment in author Amanda Hocking's Valkyrie duology. Picking up right where the previous installment left off, Malin Krigare, Valkyrie-in-Training, is on a mission to avenge her mother's death. Valkyries are meant to keep the balance in the supernatural world by eliminating immortals when their number comes up. Years before, Malin's mother made a huge mistake in letting an immortal live which has led to disorder of epic proportions.

As the series continues, Malin is tasked with traveling to the jungles of Panama to retrieve a valuable item by Odin. From Panama, Malin and her allies travel to Belize where the item retrieved from Panama will allow Malin to travel to Kurnugia to retrieve yet another item being held by Odin's son Balder that may turn the tide in Malin and her allies favor. While this happening, her boyfriend Asher is being held in Kurnugia by the Underworld Goddess Ereshkigal. Ereshkigal and her side kick, Gugalanna the Centaur, are attempting an uprising that would unleash the underworld on Earth which is already overcrowded with billions of humans and immortals.

While dealing with dark revelations about her life, her world, and her mother's life which she knew nothing about, Malin finds herself with new allies and new enemies. Her quest for the truth leads her to places she never thought possible. But, she's never been one to shy away from a fight. However, for all her strength and determination, will it be enough to save the world before it's too late? Malin allies include Oona, her brilliant roommate who also happens to be a sorceress; Quinn, a Valkyrie who is also Quinn's ex-girlfriend, and Atlas, works for Samael but is supposed to be protecting Malin.

Readers are also introduced to a new character named Valeska who claims that she has been to Kurnugia and is an impressive addition to the story. This book falls victim to over-explaining or info dumping. There are also too many characters, non-human, who have to be explained away by the author instead of just referring readers to the back of the books glossary. If you can get through all the info dumps throughout the story, there is plenty of action to keep you intrigued. As this is the sequel, the ending leaves lots of room for discussion as to what happens next for Malin and the others.