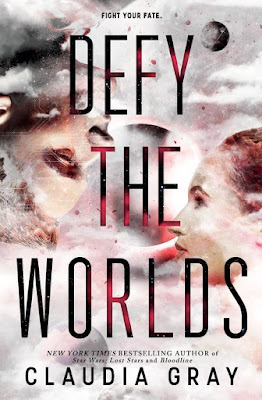 This is the thrilling and romantic sequel to Defy the Stars from the New York Times bestselling author of Star Wars: Lost Stars and Bloodline.

An outcast from her home -- Shunned after a trip through the galaxy with Abel, the most advanced cybernetic man ever created, Noemi Vidal dreams of traveling through the stars one more time. And when a deadly plague arrives on Genesis, Noemi gets her chance. As the only soldier to have ever left the planet, it will be up to her to save its people...if only she wasn't flying straight into a trap.

A fugitive from his fate -- On the run to avoid his depraved creator's clutches, Abel believes he's said good-bye to Noemi for the last time. After all, the entire universe stands between them...or so he thinks. When word reaches him of Noemi's capture by the very person he's trying to escape, Abel knows he must go to her, no matter the cost.

But capturing Noemi was only part of Burton Mansfield's master plan. In a race against time, Abel and Noemi will come together once more to discover a secret that could save the known worlds, or destroy them all.

In this thrilling and romantic sequel to Defy the Stars, bestselling author Claudia Gray asks us all to consider where--and with whom--we truly belong.

Defy the Worlds is the second installment in author Claudia Gray's Defy the Stars trilogy. The author alternates third person narratives between Lieutenant Noemi Vidal from Genesis who is dealing with the fall-out of her journey around the loop, and Abel, the most advanced cybernetic person ever created. So advanced, that he is currently hiding out among Vagabonds trying to stay away from his creator who wants to erase him. It has been, according to the story, 5-6 months since Noemi left Abel behind and made her way back to Genesis.

When she arrived, it wasn't to a heroes welcome. It was to a lukewarm reception from her peers and the Elder Council. Her previous journey allowed her to become the first human to step foot on every single inhabited planet (Kismet, Cray, Stronghold, and Earth). Her journey led her to meeting new people like Virginia Redbird, Riko Watanabe, and Ephram Dunaway. Noemi needs to figure things out for herself. She can't rely on anyone supporting her, not even her own Captain Baz who keeps her away from the Gate patrol. Who is she fighting? Is she fighting for Genesis? Is she fighting for herself?

But, before that journey gets fully involved, Genesis is hit by a modified version of Cobweb which Noemi knows all about. Noemi is ordered on yet another dangerous journey at the behest of the Elder Council to Earth. This one may be her most important one yet since her planet may not survive until she gets back. A journey which begins with her capture by the man who created Abel, and ends with a shocking, and puzzling ending. I think it is fair to say that a huge dark cloud hangs over Noemi this entire book. Was it done on purpose to ensure that readers are paying attention? No clue. More later...

Abel has changed his ships name to Persephone. His crew includes Vagabond's Harriet and Zayan who have no clue that he is a wanted man, or the most advanced mech ever created. They accept him because he's a good Captain and yes, their friend. Abel is forced to find motivation after he receives word of Noemi's capture from his maker and his daughter Gillian Shearer. His maker has never once given up on hope that Abel will just submit to his whims. Abel has shown more humility than most humans have in this story, including the numerous villians that show up at one point or the other.

Abel's journey includes Virginia Redbird from Cray. Virginia showed up in the previous installment, and I adore the fact that she has a return engagement to help Abel with his search for Noemi. While Abel and Noemi spend more than 1/2 the book separated by things out of their control, it is the last part of the book that is the most entertaining and worth reading. It is also, I think, the part where Abel and Noemi really understand that they have feelings for each other despite who they are. I have said this before, Abel and Noemi each experience enough prejudices to fill their own books.

Abel is a wonderful character who I have nothing but good things to say about. However, with his so called higher intelligence, he misses some really important clues. I dare say that he should have seen the ending coming! Noemi's loyalty to Genesis really needs to be thought out. They haven't exactly rolled out the red carpet for her after what she's been through. She continues to put Genesis ahead of her own happiness which, I suppose, is to be expected from a highly trained soldier. I don't think it's a spoiler to say that Noemi is one of those characters who has a heroine complex. It if means sacrificing to save others, well, she is all in.

We do get a new setting for this story which I won't spoil. We also have a pretty curious gathering of forces you would have never thought would come together for one purpose. I have to say that my rating is totally based on the final chapters of this book. It is based on what happens to both Abel and Noemi, mostly Noemi and why I feel that the situation didn't need to happen. Yes, I saw it coming from a mile away. Apparently, lots of readers did as well. I even made a comment that I wouldn't be liking the ending because I knew what the author was about to do. I hate when that happens.

Authors, in my opinion, are free to do what they choose with their characters. Authors do what Gray did because of either shock value, to make the story more believable, or to ensure that readers will come back to the final installment to see what happens next. Can we also say it's part laziness? I can't fully embrace the thought process or the apparent direction that Gray has apparently decided to take. Abel's exploration of what it means to be human is curious. What isn't is the fact that he has a tendency of ignoring his mech side. Can someone like Abel really be thought of as human, and not Mech? Can he be accepted by those who have felt pain and suffering by other mech versions? The romance between Abel and Noemi works because they both understand how it feels to be outsiders. There are a whole lot of moral and ethical issues that are bandied about in this story.