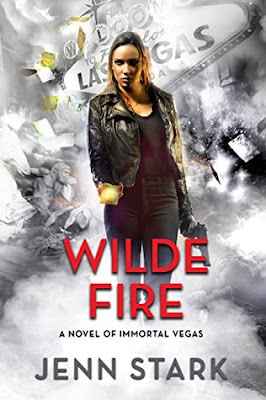 It's the end of the world as we know it... The war on magic is here, and Mistress of the House of Swords Sara Wilde has done everything she can to prepare. The Arcana Council has recalled its most powerful members to hold the line, and the Houses of Magic are frantically strengthening their defenses. Then the first volley hits: a plague of demons freed to ravage the earth. Scrambling, Sara discovers that the war will be fought not on one front, but three--while new threats emerge at a breakneck pace.All the magic in the world may not be enough to save it.From an ancient coven in Chicago to the sunbaked streets of Vegas to the frozen ice fields of Antarctica, Sara rallies her closest friends and fiercest enemies to protect the earth from the gods and monsters raining down from the dark side of the veil. To succeed, Sara must confront the truths she's been avoiding her whole life, and take on forces that have kept the Connecteds powerless for far too long. But is she willing to make the ultimate sacrifice?When it comes to Armageddon, where there's smoke there's always Wilde Fire

Wilde Fire is the tenth installment in author Jenn Stark's Immortal Vegas series. Sara Wilde, Mistress of the House of Swords, purveyor of lost artifacts, and tarot card reader extraordinaire, has her hands filled in this story. The war on magic is in full swing, the Gods, including her own mother and Llyr are trying to break through the veil to earth, and Sara must finally accept that she can no longer stand back and be an observer.

She has to put together an alliance of not only the four human Houses, but the Arcane Council, the Connecteds, and others like Danae, the Chicago witch and her coven of Deathwalkers who we've seen before in this series. While in Chicago, a kerfuffle happens that allows denizens of demons to escape and nearly allows the most dangerous God, Llyr to also escape as well. This is only a tip of the iceberg of things to come. One of the things that has been the focal point of this series since Sara returned from Hell, is her growing powers and her connection to the Magician.

Her powers, along with others, will be key to preventing the apocalypse from going forward. Sara knows that she is at the forefront of understanding where her future will take her. She can't trust the discombobulated Council who seems to be in chaos and fighting among themselves. Her safety net, The Magician, is having is own issues and is taking Sara down a twisted road. There are key players, like Death, and The Devil, who finally step up and prove they are worthy of being Sara's allies. Same can be said for Nikki, and Detective Brody.

Wilde Fire is the final installment in the Immortal Vegas series, but never fear. The author intends to continue Sara's story in what the author is calling Wilde Justice. My rating reflects the fact that the ending never really solves anything to the level I have come to expect from the author. It's almost as though she said, welp, this is the end of the road for this series, but hey, I have another one I'm writing soon! Not fair.

So not fair that we don't get a resolution of the war on magic after 10 books. There is a curious ending which I will not spoil, as well as some emotional moments. There are even new players introduced into the mix. We'll see if they return or whether they were just a bump in the road for Sara. If you've read the book, you already know the surprise that I've seen coming for awhile now. It was heartwarming to read about how Nikki and Brody's feelings about Sara and what she has accomplished since she was Sariah. Even Sariah has become an integral part of Sara's world.

Obviously, I will be continuing Sara's journey when the author decides to release the next installment. There's some interesting ideas that lay ahead, and I don't think we've see the last of Sara's fight for those who can't fight for themselves.