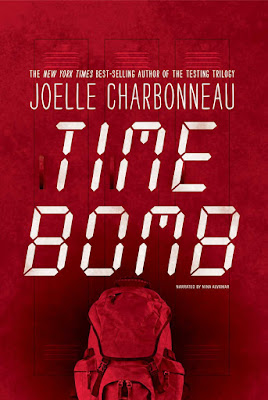 Seven students trapped in their school after a bomb goes off must fight to survive while also discovering who among them is the bomber in this provocative new thriller from the author of the New York Times bestselling Testing Trilogy. Perfect for fans of This Is Where It Ends. A congressman's daughter who has to be perfect. A star quarterback with a secret. A guy who's tired of being ignored. A clarinet player who's done trying to fit in. An orphaned rebel who wants to teach someone a lesson. A guy who wants people to see him, not his religion.They couldn't be more different, but before the morning's over, they'll all be trapped in a school that's been rocked by a bombing. When they hear that someone inside is the bomber, they'll also be looking to one another for answers. Told from multiple perspectives, Time Bomb will keep readers guessing about who the bomber could be—and what motivated such drastic action.

Joelle's Charbonneau's Time Bomb is a standalone, young adult, thriller & suspense novel featuring a variety of characters, and a variety of narratives. It is 9 days until the start of the new school year. As a bomb goes off in the school, it is possible to say that every one of these characters could be the one responsible. For 7 teens, their lives are about to be changed forever.

16-year old Diana Sanford is the daughter of a congressman,  past homecoming queen, and on the yearbook committee. She's been told that she has to be perfect all the time. That means close to perfect grades, and not wearing hand me down clothes. Her father's bill has divided people, and put her in the spotlight. Diana seemingly knows every action the rescuers will make since she is the most noticeable and known character in the school.

Hallwood H.S. Junior Frankie Ochoa is the schools star quarterback and captain. Frankie is a prankster. It is his turn to prank the new kids as they prepare to enter a new school year. Little does he know that he will soon be at the center of a major incident that will forever change his life.

Tad is a star receiver on the football team. Even though he has come out to his family, nobody else knows he's gay. He's  tired of being ignored by the boy he thought had feelings for him. Tad is told to stay away from the school by Frankie, but ignores him. Tad finds that being angry all the time instead of listening may be deadly to his health.

The mysterious Z recently lost his mother to cancer. He is labeled a troublemaker by teachers. Teachers who think they can judge him without actually knowing what he's been through. He wants to teach someone a lesson they won't soon forget. His only real friend is Kaitlin O'Malley who he continues to push away to keep her from being stained with his troublemaker label.

Rashid Farsoun is a guy who wants people to see him, and not that he is a Muslim. He believes that the best life has balance. After shaving off his beard, he believes that he will no longer be called names, or thought of in a bad way. Then tragedy strikes the school and guess who is the first person to be blamed for the bombs going off?

There is a lot that has been said about the timing of the book, so I won't. Besides, an author doesn't have control over world events. They can't control when a publisher schedules a book to be released. They can't control what will happen before their book is released to the public. There is a very diverse cast in this book. You have a Muslim teen who deals with teasing and racial stereotypes, an overweight girl who continually gets bullied, and a mixed race teen who is gay and a football player.

There is also a political message that the author is sending out as well. But, until we, as a society, can shut our mouths, and open our ears, we will never come together to solve the countries biggest issues. The synopsis mentions that there are 7 characters in this book. However, Kaitlin isn't one of the main characters who is introduced in the book. She is a character who genuinely cares about Z, and ends up in the worst possible place. This is a story that will keep you guessing as to who the bomber is, and why this person chose to do something so drastic. In fact, the entire cast has a whole lot of issues to resolve before they judge others. The hero of this book, for me, is Rashad. The weakest characters are Diana and Cas.

1:51 P.M.
“DON’T FIGHT,” CAS SAID from the doorway that Frankie and Z had just disappeared through. Tears glistened in her eyes. “Can we turn the radio back on? Maybe they’ll tell us help is finally coming.”
Rashid clicked on the radio before heading over to help Tad. There was the buzz of static, then the announcer telling everyone that the firefighters were making progress. The fire was contained to the west side, and they hoped to have it out soon.
“With one person of interest being questioned, authorities are now working to find another individual they have confirmed is involved in this terrible bombing. A source confirms that the individual is one of the students trapped on the second floor of the school. With four bombs having already gone off, there appears to be one explosive device still inside the school that could detonate at any time.”
Another bomb was ready to go off, and the bomber was one of them.