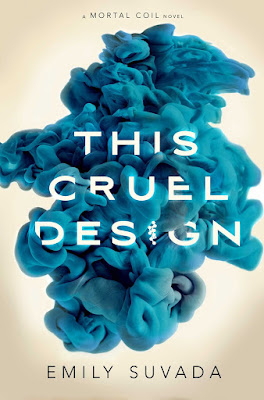 Cat thought the Hydra epidemic was over, but when new cases pop up, Cat must team up with an enemy to fix the vaccine before the virus spirals out of control in this thrilling sequel to This Mortal Coil, which New York Times bestselling author Amie Kaufman says “redefine’s ‘unputdownable.’”

The nightmare of the outbreak is finally over, but Cat’s fight has only just begun.

Exhausted, wounded, and reeling from revelations that have shaken her to her core, Cat is at a breaking point. Camped in the woods with Cole and Leoben, she’s working day and night, desperate to find a way to stop Lachlan’s plan to reprogram humanity. But she’s failing—Cat can’t even control her newly regrown panel, and try as she might to ignore them, she keeps seeing glitching visions from her past everywhere she turns.

When news arrives that the Hydra virus might not be as dead as they’d thought, the group is pushed into an uneasy alliance with Cartaxus to hunt down Lachlan and fix the vaccine. Their search takes them to Entropia, a city of genehackers hidden deep in the desert that could also hold the answers about Cat’s past that she’s been searching for.

But when confronted with lies and betrayals, Cat is forced to question everything she knows and everyone she trusts. And while Lachlan is always two steps ahead, the biggest threat to Cat may be the secrets buried in her own mind.

This Cruel Design is the second installment in author Emily Suvada's Mortal Coil series. 18-year old Catarina "Cat" Agatta thought she had saved the world by eradicating a terrible virus that caused victims to detonate, and sent billions more to underground bunkers under the control of Cartaxus. To make matters worse, Cat discovered some troubling secrets about her own past, as well as her connection to Leoben, Cole, and Anna (who we meet in this book) who are all black-out agents.

Unfortunately for everyone involved, Dr. Lachlan Agatta has fled to parts unknown taking his plans to recode humanity with him. Thanks to his Daemon Code which gives him access to everyone on the planet, Lachlan believes that he can use make humanity better by erasing the wrath DNA from everyone. Cat doesn't want him to get away with it. But, things quickly change right from the beginning of this story. Even though the vaccine is out there and the virus should be dead, people are still detonating.

Brought out of their temporary reprieve by Cartaxus, thanks to an unknown virus that seems to be ramping up, Cat, Leo, and Cole must find a way to locate Lachlan, find a way to head off this new strain, while also dealing with Cat's repressed memories which are rapidly proving to be more of a clue as to what really happened to a certain unnamed character who walked away from Lachlan and let the others like Cole, Leo, and Anna behind.

This Cruel Design has plenty of action and twists and shocks, that left me reading as quickly as I could to see if the author was going to leave us any clues as to what is apparently going to be the finale of the series. New readers to this series may want to begin with the first volume before jumping into this story. If you are a fan of science-y things, you will love this story. If you're not, you might still enjoy it because it touches on so many technical questions about what scientists may have up their sleeves in the future for humanity.

The story dives deeper into the world of Cartaxus, hackers and what Lachlan did to Catarina. One of the plot lines of this book is the ying and yang of Cat and her suppressed memories and who she may or may not be. I won't spoil things, but Cat is wading into a new world with the terrifying prospect that she might be losing who she is. If she gets to the point where she does lose herself, what happens then? Will the yang part of her take control, or will she have the strength to stand and take control of her own life and her own fate? We shall see.

A depressing part of the story is the romance angle between Cat and Cole. Put me down for not being a fan. Cole is hiding secrets from Cat, while Cat is trying to deal with troubling secrets that slowly unravel. There are some new intriguing characters in this story including Mato, and Regina, a genehacker who runs what is known as Entropia where people have gone beyond the boundaries of what one can do to their own bodies.

I will leave you with this. There is no second book let down syndrome for This Cruel Design. It takes things even further than readers saw in the first installment and leaves so many twists and revelations, even the jaded among us will be happy. The author leaves a really cruel ending for readers to swallow. I honestly thought this was a duology for some lame reason, so imagine my surprise at what came for readers in the last several chapters?