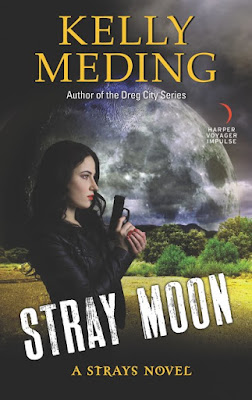 Para-Marshal Shiloh Harrison has always been a great number two for the East Coast unit. But after her boss is found dead (having betrayed the paranormals he was sworn to protect), she’s suddenly thrust into a leadership role she isn’t prepared for. And it doesn’t help that she traded away memories of one of her most important team members to save another’s life during her last mission.

Too, she’s in charge of a unit that is mired in bureaucratic red tape, meaning she’s essentially under house arrest. But a West Coast Para-Marshal has astral-projected a warning: werewolves are going missing, and she needs Shiloh’s help. Last time it was vampires. This time it’s werewolves. Half-djinn herself, she knows she can’t just sit around and do nothing while paranormals are getting snatched. Her old boss may have broken his oath, but Shiloh will do anything to serve and protect.

Stray Moon is the second installment in author Kelly Meding's Stray series. Para-Marshal Shiloh Harrison's team is in shatters. Two members have been outed as being double agents for a mysterious employer. Their team leader betrayed them, and Shiloh herself bargained away her memories of the person she loves the most in order to save lives. But, there's no time to wallow in self-pity. Not with the US Marshal services keeping an eye out for any more wrong doing on their part.

Shiloh, Jaxon Dearborn (skin-walker), and Novak Smith (Incubus) are approached by a moon witch named Chandra Goodfellows. Chandra is also a Para Marshal from the West Coast. Even with both teams on mandatory leave, Chandra believes that with Shiloh, Jaxon, Novak, plus master vampire Woodrow Tennyson, as well as Shiloh's mother Elspeth help, they will be able to track down the missing 28 werewolves who disappeared from Florida and California packs.

Shiloh has been a Para-Marshal for 6 years first as second-in-command to Julius Almeida, and now as its de facto squad leader. Shiloh is a half djinni with abilities to grant three wishes and has Quarrel pheromones that are hard for her to control. Her abilities often affect the combative nature of humans. She is tough, snarky, and fun to follow along with. This is a series that has seen vampires, werewolves, necromancers, and Goddesses who live between worlds. Now, we can add something even more brutal and powerful who shakes up Shiloh's world.

The story book brings back Werewolf Will Carson from one of the authors short stories called "Feral House" that is featured in Carniepunk. It was that story that first got Shiloh, Jaxon, and their former squad leader involved in becoming Para-Marshals. I was actually happy that the author brought Will back for this reunion. I hope that he will once again play a role in what happens next. Especially since this story leaves a whopper of a cliffhanger ending that is sure to make readers eager to find out what happens next.