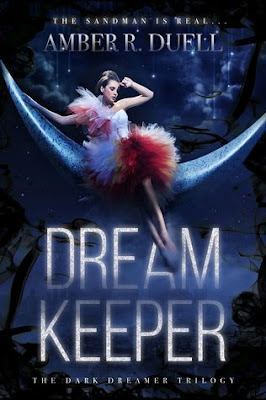 The Sandman is seventeen-year-old Nora's closest friend and best-kept secret. He has to be, if she doesn't want a one-way ticket back to the psychiatrist. It took her too long to learn not to mention the hooded figure in her dreams to her mother, who still watches Nora as if she'll crack. So when Nora's friends start mysteriously dying gruesome deaths in their sleep, she isn't altogether surprised when the police direct their suspicion at her. The Sandman is the only one she can turn to for answers. But the truth might be more than she bargained for...

For the last five years, the Sandman has spent every night protecting Nora. When he hid the secret to the Nightmare Lord's escape inside her dreams, he never expected to fall in love with her. Neither did he think his nemesis would find her so quickly, but there's no mistaking his cruel handiwork. The Nightmare Lord is tired of playing by the rules and will do anything to release his deadly nightmares into the world, even if that means tormenting Nora until she breaks.

When the Nightmare Lord kidnaps Nora's sister, Nora must enter enemy territory to save her. The Sandman is determined to help, but if Nora isn't careful, she could lose even more than her family to the darkness.

“For every light, there was a shadow, for every dream, a nightmare.”
Dream Keeper is the first installment in author Amber R. Duell's The Dark Dreamer Trilogy. A fair warning, this story is dark. There are grotesque death scenes that may not be suitable for those who are triggered by blood and more blood. Personally, none of this affected me in the way I rated this book overall or my desire to read the sequel. This story alternates between 17-year old Nora Gallagher, and the Sandman who is the only one who has kept her sane since her parents divorce.
Nora has had an ongoing relationship with the Sandman every night for the past 5 years. The same Sandman who is supposed to keep the nightmares away while you are sleeping. Nora learned that talking about the Sandman to her friends and family was a no no as it would only land her into treatment yet again. 5 years ago, the Sandman placed a dream inside of Nora's mind thus making her a Dream Keeper.
The Dream is the key to unlocking an invisible barrier keeping the Nightmare Realm from spilling into the Dream Realm, or even the Day Realm. But, the Weaver is pushing harder and harder for Nora to release the Dream to him. The pushing ends up with several people that Nora knows being murdered in a brutal manner and her older sister, Katie, being kidnap and held in a world where nightmares are actually alive. As Nora weighs in on this new reality she thought was a safe harbor, and ends up in a battle between the Dream Realm and the Nightmare Realm, the Sandman will need to use every trick in the book in order to save her. But, will it be enough, or will the Weaver get what he wants?
The Nightmare Lord is one of the creepiest and disturbing villains you will meet. He keeps the creep factor constant throughout the story. The real terror unfolds with the vivid death scenes, each more brutal than the last. The tension remains high and there's definitely tons of unexpected twists and turns. In other words, there's a lot to make this a read which is hard to put down.
Book # 2 - Dark Consort
Book # 3 - Night Warden