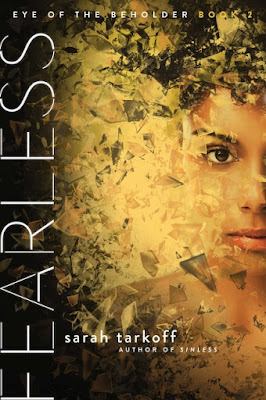 In a near future society in which morality is manifested through beauty and ugliness, a young woman will imperil her future and her world to expose the global shadow network that uses its power to play God and control humanity.

A decade ago, Grace Luther’s life was changed by the Revelations: the moment when Great Spirit “saved” humanity and transformed the world into a place where pious behavior is rewarded with beauty, and wrongdoing results in ugliness and even death.

Now, at eighteen, Grace knows that everything she believed about the Revelations is a lie—a myth constructed by the government of the Prophets to force its citizens into model behavior . . . and one that led to her mother’s death. She is determined to expose the deception and bring down the Prophets, even if it means aligning herself with the resistance, a group she doesn’t entirely trust.

Fearless is the second installment in author Sarah Tarkoff's Eye of the Beholder series. This story picks up approximately 6 months after the ending of Sinless. 10 years ago, a world wide phenomena called the Revelation, united the entire world under one Universal Theology. So called Prophets rose to prominence. Almost everyone believes that those like Joshua are a direct mouthpiece of the Great Spirit. Thanks to a network of tiny nanobots in everone's brains, there have been no wars or large scale conflicts for 10 years.

After insinuating herself into Prophet Joshua’s inner circle, Grace gets closer to fulfilling her mission to destroy his mind-influencing nanotechnology. Grace is now a double agent for a world wide resistance that we, as readers, will get an in-depth look into as Grace makes her way across the world trying to stay one step ahead of Joshua and others like him who rose out of the so called Revelation. Thanks to shocking discoveries in Sinless. Grace has chosen her own path.

While attending NYU, she has to deal with Dawn, and the resistance who she doesn't full trust. She has to deal with Joshua, who has his own agenda when it comes to Grace. But, the one person who she is seriously questioning is Zack, the boy who seems to be everywhere she goes. Is Zack an ally, or just another pawn in the Prophets game? Zack is a secretive government agent (which will be brought to life in this story) who is sometimes an enemy and sometimes a friend has been shadowing her every move.

Is he protecting her—or hunting her? And Jude, her first love, has returned from hiding to aid her—a task complicated by their history. In a dangerous world filled with lies and betrayals, Grace can’t trust anyone. And the choices she makes will either save her friends, the resistance, and the hope of attaining free will—or secure the Prophets’ power and ultimate control.

I am kind of unhappy with Grace. She's a pawn to everyone from the Prophets, to the Prophets people, and of course, the Rebellion who wants her to do what they say or end up in even worse trouble. Each side wants more and more from here. Each side really doesn't care what happens to her when all is said and done. Plus, Grace has to choose who she trusts. Can she trust Zack? Or, how about Jude who she left behind in the previous installment? The ending leaves hope, but after reading the opening, I'm urious as to how the author is going to wrap this story up.