#Review - The Kingdom of Copper by S.A. Chakraborty #Fantasy / #Epic 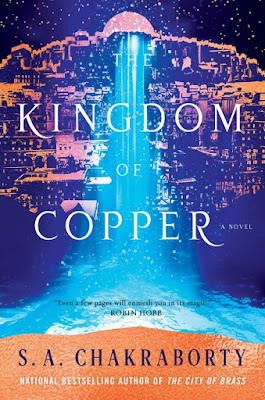 
S. A. Chakraborty continues the sweeping adventure begun in The City of Brass—”the best adult fantasy I’ve read since The Name of the Wind“ (#1 New York Times bestselling author Sabaa Tahir)—conjuring a world where djinn summon flames with the snap of a finger and waters run deep with old magic; where blood can be dangerous as any spell, and a clever con artist from Cairo will alter the fate of a kingdom.

Nahri’s life changed forever the moment she accidentally summoned Dara, a formidable, mysterious djinn, during one of her schemes. Whisked from her home in Cairo, she was thrust into the dazzling royal court of Daevabad—and quickly discovered she would need all her grifter instincts to survive there.

Now, with Daevabad entrenched in the dark aftermath of the battle that saw Dara slain at Prince Ali’s hand, Nahri must forge a new path for herself, without the protection of the guardian who stole her heart or the counsel of the prince she considered a friend. But even as she embraces her heritage and the power it holds, she knows she’s been trapped in a gilded cage by a king who rules from the throne that once belonged to her family—and one misstep will doom her tribe.

Meanwhile, Ali has been exiled for daring to defy his father. Hunted by assassins, adrift in his ancestral land, he is forced to rely on the frightening abilities the marid—the unpredictable water spirits—have gifted him. But in doing so, he threatens to unearth a terrible secret his family has long kept buried.

And as a new century approaches and the djinn gather in Daevabad for celebrations, a threat brews unseen in the desolate northern borderlands. It’s a force that would bring a storm straight to the city’s enchanted gates . . . and one that seeks the aid of a warrior trapped between worlds, torn between a violent duty he can never escape and a peace he fears he will never deserve.

The Kingdom of Copper is the second installment in author S.A. Chakraborty's The Daevabad Trilogy. This story picks up right where The City of Brass left off, then moves ahead 5 years. The story revolves around three characters; Alizayd al Qantani (Ali), Banu Nahri, and Darayavahoush (Dara). The story finds our main trio adjusting to new lives. While Nahri is growing her skill as a healer, she’s trapped in an unhappy marriage to Muntadhir and is essentially a prisoner of the palace since the Emperor is keeping a keen eye out for her.

Nahri, the last known female healer, was brought up in Cairo where she was encouraged to heal anyone. She tries to bring that same determination to Daevabad in healing all Daeva, Geziri, shafit, but politics are a sticky thing to deal with. So, she chooses to ignore the politics by building a bridge between all of the factions who currently call Daevabad home. That includes finding ways to rebuild a hospital that was once destroyed and many of her own people were brutally murdered in the process. While the process is very slow in getting the hospital up and running. Nahri finds that she has an ally that seems eager to help her.

Ali is very much a tortured soul who as the book begins, has been exiled to the desert and chased by assassins. But, he finds a community where he can put his Marid gifts to good use. Ali has changed so much that you wouldn't recognize him from the first story. He is more powerful. He was happy being away from Daevabad, but politics always end up getting in the way of things that must be done. Ali and Nahri's relationship once thought broken forever, thaws to the point where they have a mutual goal even if it does offend his father.

Dara has been pulled back from death to serve and scheme with Nahri’s mother, Manizeh, who is determined to destroy Daevabad. As Daevabad prepares its celebrations for the turning of a new century, an unknown force from the North is preparing a siege to overthrow the current regime.

The story takes a very long time to build and develop as we learn more of the tensions presiding between the races residing in Daevabad and each character has been up to since the ending of City of Brass. This is a story filled with political intrigue, the tribal conflicts, and the desire for revenge. Dara would have to go down as the villain of this story, but I am curious as to where the author is going to take his story after the brutality of the way this story ended, and how the events leading up to the ending played out.

This is me being fair. 1. The book could have been 200 pages shorter and perhaps I wouldn't have ended up skipping through a bunch of pages in order to get to the fantastic action packed ending pages. 2. The best part of this book is the last chapters of the book as Dara and Manizeh's plans are finally put into action, which sends Nahri and Ali straight into a battle that they want nothing to do with. 3. The way the book jumps from the part where the last book ended, to 5 years in to future, was not smooth at all. If you didn't pay attention, you wouldn't know about the time line jump.

However, because of the way this story ends, I will be reading the final book in the series to see what happens to our trio of characters who have so much at stake.