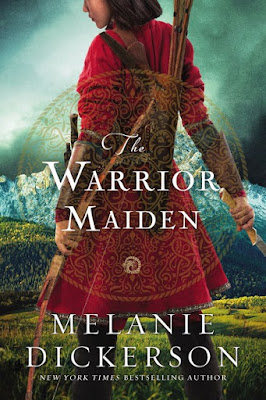 Mulan isn't afraid to pretend to be a son and assume her father's soldier duties in war. But what happens when the handsome son of a duke discovers her secret?

Mulan is trying to resign herself to marrying the village butcher for the good of her family, but her adventurous spirit just can't stand the thought. At the last minute, she pretends to be the son her father never had, assumes his duties as a soldier, and rides off to join the fight to protect the castle of her liege lord's ally from the besieging Teutonic Knights.

Wolfgang and his brother Steffan leave Hagenheim with several other soldiers to help their father's ally in Poland. When they arrive, Wolfgang is exasperated by the young soldier Mikolai who seems to either always be one step away from disaster . . . or showing Wolfgang up in embarrassing ways.

When Wolfgang discovers his former rival and reluctant friend Mikolai is actually a girl, he is determined to protect her. But battle is a dangerous place where anything can happen-and usually does.

When Mulan receives word that her mother has been accused of practicing witchcraft through her healing herbs and skills, Mulan's only thought is of defending her. Will she be able to trust Wolfgang to help? Or will sacrificing her own life be the only way to save her mother?

The Warrior Maiden is the Ninth installment in author Melanie Dickinson's Hagenheim series. Each book features two different characters from book to book. This story is about an 18 year old girl named Mulan. Mulan enjoys horses and archery. She has been trained not by her father who is a soldier, but by her friend 12-year old Andrei who has followed her father around from battle field to battle field.

With her country, Lithuania, fighting against the Teutonic Knights, her father having passed away weeks ago, her mothers attempt at marrying her to a local butcher, and the fear of losing her home, Mulan makes a choice to leave home and pick up the name of Mikolai. With men’s clothes hiding her secret she sets off to prove her worth as a soldier but complications arise when she meets Wolfgang of Hagenheim.

She must work with Wolfgang, who just happens to be a Duke's son, to end the war and save the people she loves. Wolfgang and his brother Steffan are like yin and yang. Wolfgang joins with Duke Konrad's army to fight against the Knights. It is where he meets the fearless Mikolai who seems a bit too good to be true. Steffan wants to fight for the Teutonic Knights who claim that the Pope has given them and excuse to oppress people from countries like Lithuania and Poland.

Steffan's actions in this book are reckless. He's hurting from an incident that took place when he and Wolfgang were children and has carried the baggage for years. The only question is whether or not the brothers will have to face each other in battle, and who will be standing in the end. The other question is what will happen once Mulan's secret is finally discovered. Under Christian dharma, women aren't allowed to fight as soldiers, nor are they allowed to wear men's clothing.

Melanie Dickinson is a new author to me. So, I wasn't aware that this was a Christian based series. I haven't read the first 8 books in this series. I learned, through reading this story, about other characters who have been featured in previous novels. I am not sure if I will go back and read any of the other books. I have become rather apathetic when it comes to Christian novels. I am a believer in God but I'm not afraid to question things that I have seen in my 6 decades of living. Nor am I afraid of calling out the Church for centuries of wrongdoing. With the rise of anti-Christianity in this country and other places, I do not believe that someone who is not a Christian will like this story.

Mulan, even though she is Chinese in birth, really doesn't bring a whole lot of Asian influence to the story. As the only woman with Mongolian decent in her village, she suffered unjustly because she did not look like everyone else. One of the puzzling aspects of this story is Mulan herself. In the beginning, she struggles to hit the broad side of a barn, and can barley carry a sword. Yet, when it comes to battle, she is a bright star who rushes head strong into danger without fear for her safety. Maybe a bit over the top which is why my rating is what it is.

I received an ARC from NetGalley in exchange for an honest review.