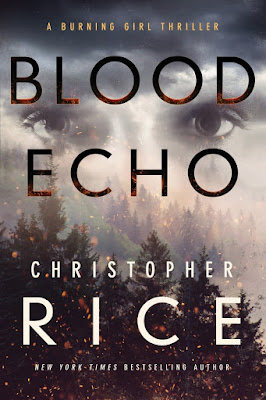 
A conspiracy that promises bloodshed and the only woman who can stop it collide in the page-turning thriller by Christopher Rice, Amazon Charts bestselling author of Bone Music.

Kidnapped and raised by serial killers, Charlotte Rowe suffered an ordeal that made her infamous. Everyone in the world knew who she was. But no one in the world has any idea what she’s become…

Charlotte is an experiment. And a weapon. Enabled by a superpower drug, she’s partnered with a shadowy pharmaceutical company to hunt down and eliminate society’s most depraved human predators. But her latest mission goes off the rails in a horrifying way. Unsettled by her own capacity for violence, Charlotte wants some time to retreat so she can work on her new relationship with Luke, a sheriff’s deputy in the isolated Central California town she now calls home.

If only the threats hadn’t followed Charlotte there.

Something sinister is evolving in Altamira, California—a massive network of domestic terrorists with ties to Charlotte’s influential and corrupt employers. As a vast and explosive criminal conspiracy grows, the fate of Charlotte’s hometown hangs in the balance. With everyone she cares about in danger, Charlotte has no choice but to bring her powers home.

Charlotte Rowe has been triggered, and now she’ll have to take matters into her own powerful hands.

Blood Echo is the second installment in author Christopher Rice's Burning Girl series. The story takes place 5 months after the events of Blood Music and absolutely should be read as the books are released. The series follows Charlotte Rowe aka Trina Pierce who spent 7 years being raised by serial killers Daniel and Abigail Banning. It has been 18 years since her rescue, and Charlotte's life has turned in so many different directions, that you just have to hold on to your seat and watch what happens next.

The usual suspects are back again for this sequel to Blood Music. Charlotte, Cole Graydon the CEO of Graydon Pharmaceuticals and for all technical reasons, Charlotte's boss. There's also Luke & Bailey Prescott, brothers who have in their own way helped Charlotte through difficult issues. The last two are Noah Turlington and Marty Cahill who were also deeply involved in where Charlotte is today.

After Cole decided to bring commerce to Altamira, he thought he had enough security to protect his investment. Charlotte is on the forefront of Cole's aspirations to create a drug called Zypraxon that gives Charlotte super human strength once she is triggered by certain emotions. He's hoping that he can mass produce the drug so that others who fell to rapists, serial killers, and human traffickers can fight back and take down their abusers.

Charlotte goes after the worst of the worst from rapists, to serial killers. But, when things at her hometown go off the rail, Charlotte and her crew will need to dig a bit deeper if they are to survive the events that will lead to all sorts of twists and revelations. When Luke comes into a strange case of a woman who appears to have been beaten, he starts to be curious as to what else he can dig up. One could say that life in Altamira is easy peasy and not a care in the world. Just don't look too closely at the people who have moved into the area, and are planning some massive protest events with mass casualties.

I have to say that I liked the final parts of this story better than I did the first book. Charlotte has got her hands full with both Cole, and the dark that seems to have followed her home. How far can Charlotte really trust Cole to protect her? How far will Charlotte go to protect the ones she loves? This book involves Cole and Luke more than it did the previous book. Luke feels a bit left out since he can't be on Charlotte's team any more while working as a Deputy Sheriff. Meanwhile, Cole is being twisted in many different directions knowing that he has the future in his hands if she doesn't suddenly disappear or turn against him. Will be interested to see what path the author follows next.