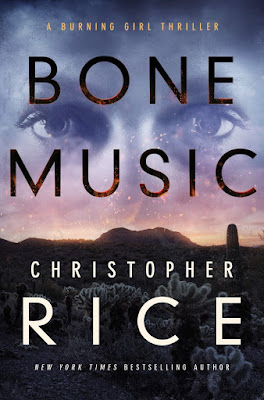 Charlotte Rowe spent the first seven years of her life in the hands of the only parents she knew—a pair of serial killers who murdered her mother and tried to shape Charlotte in their own twisted image. If only the nightmare had ended when she was rescued. Instead, her real father exploited her tabloid-ready story for fame and profit—until Charlotte finally broke free from her ghoulish past and fled. Just when she thinks she has buried her personal hell forever, Charlotte is swept into a frightening new ordeal. Secretly dosed with an experimental drug, she’s endowed with a shocking new power—but pursued by a treacherous corporation desperate to control her.

Except from now on, if anybody is going to control Charlotte, it’s going to be Charlotte herself. She’s determined to use the extraordinary ability she now possesses to fight the kind of evil that shattered her life—by drawing a serial killer out from the shadows to face the righteous fury of a victim turned avenger.

Bone Music is the first installment in author Christopher Rice's Burning Girl series. The series features Charlotte Rowe who as a baby named Trina Pierce, lost her mother, and spent the next 7 years being raised by prolific serial killers Daniel and Abigail Banning. Charlotte changed her name, and merged into the background trying to avoid all sorts of unpleasantness and questions about her participation in he Banning's perverted crimes. But, there are those who won't leave her alone.

Most of her life she has been given the nicknamed of "Burning Girl" for reasons I won't spoil. There were even movies made to take advantage of her notoriety. Hell, her own father exploited her notoriety which finally ended with Charlotte making a clean break from him, and her birth name. Now living in seclusion in Arizona, she enlists the aid of a psychiatrist named Dylan who seems to help her as he learns everything about her.

Dylan however has his own agenda and tricks her into taking what she believes is a new drug to calm her anxieties. The effect is mind-blowing and once more Charlotte’s world spins out of control, leaving her with a whole set of frighteningly different problems. This turn of events forces Charlotte to run once again, but this time back to the home where she once lived. A home where she was bullied as a child by one person in particular; Luke Prescott who is now a Deputy Sheriff.

Along for the ride is her deceased grandmother's former boyfriend Martin Cahill. The one thing that keeps this book going is the short stories. I didn't mind the different narratives that are mixed in with Charlotte's as well as Luke's. It gave the book a bit more depth. Charlotte is a fairly decent character once you get to know her struggles and challenges and the choices she now has at her disposal. It is fair to say that you should expect to suspend a bit of reality when you read parts of this book. Charlotte on the super-drug is a badass, but a bad-ass that kind of walks the line between grey and black.

Note: I don't warn readers about trigger warnings. I will say, however, that this is not a young adult themed series. Charlotte is an adult and so is every other character both good and bad. I borrowed this book via Kindle Unlimited after being offered the chance to read the second book in the series by the publisher. That review shall be forthcoming this week.