#Review - Extinction of All Children by L.J. Epps #YALIT #Dystopian 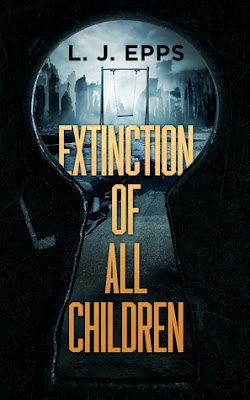 A young adult, fantasy novel about a teenager who is the last eighteen-year-old in her territory. There will never be another child; every baby born after her has been taken away. Everyone wonders why she survived.

Extinction of Children is the first installment in author L.J. Epps series by the same name. 18-year old Emma Whisperer was born in 2080, in the small futuristic world of Craigluy which is apparently a territory between Arizona and California. President Esther, in charge for the last twenty-two years, has divided their world into three territories, separated by classes-the rich (Territory U), the working class (Territory M), and the poor (Territory L)-because she believes the poor should not mingle with the others.

The poor are no longer allowed to have children, since they do not have the means to take care of them. Any babies born, accidentally or willfully, are killed. Mothers are placed in jail to be punished for having children. Emma is the last eighteen-year-old in her territory. Somehow, she survived this fate. As Emma is turning 18, the president expects Emma to give a speech at how grateful she is that she's the last 18-year old. Needless to say, this story would be extremely short if that is where it ends.

Perhaps because people have a love to hate relationship with Emma, she chooses to stand up to Emma rebels. Perhaps because her own sister is hiding a huge secret, Emma stands up to tyranny, she stands up to the President with a rousing speech that turns a whole bunch of people's heads. It also gets her 30 days confinement as well as becoming a Guard. During Emma's journey, she meets and becomes friends with Eric, a young guard who understandably is puzzled by her actions.

She also befriends Samuel, another guard for the president, who is summoned to watch over her. As Emma meets new people, she doesn't know who she can trust. Yet, she finds herself falling for a guy, something which has never happened before. After doing what she feels is right, Emma finds herself in imminent danger. In the end, she must make one gut-wrenching decision, a decision that may be disastrous for them all.

I am sure you are aware, but NetGalley was offering all three books. So, yes, I have two more reviews coming for the next two installments. Emma is a curious sort. She knows her parents are keeping a secret. She knows that her parents were once friends with the President. She also realizes that people who work for the President are not out to be her friends, or to help her with her goals. Yet, it is Eric and Samuel who come through the most for Emma. Now, onto the sequel!