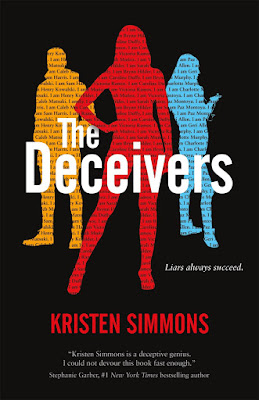 When Brynn Hilder is recruited to the elite Vale Hall, she can’t believe her luck. Vale means a new life, away from her mom's loser boyfriend Pete and her run-down neighborhood.

But Brynn soon learns that she hasn’t been recruited because of her straight A's—she’s been chosen because up until now, her extracurriculars involved conning rich North Shore kids out of their extravagant allowances in an attempt to save up for college. At Vale Hall, she’ll be expected to use her skills for a much bigger purpose: to rid the city of crooked politicians and corrupt officials. The thought of giving entitled jackasses their comeuppance is the maraschino cherry on this too-good-to-be-true sundae.

But that’s before Brynn meets her mark—a senator’s son. Before she understands that the headmaster of Vale Hall has secrets of his own and will stop at nothing to protect them. Before she realizes how in over her head she is. As the lines of right and wrong blur for Brynn, she must figure out who she can trust before it’s too late.

The Deceivers is the first installment in author Kirsten Simmons Vale Hall trilogy. 16-year old Brynn Hilder has always had to be quick on her feet, to keep her safe for her mother’s drug dealing loser boyfriend Pete. However, he isn’t completely useless, he did teach her all about conning, both the long and short one. Brynn has been performing short cons in the ritzy neighborhoods to earn enough money to move away from home and go to college.

Her dreams may be closer than she thinks, until she loses all of her money that she saved up. Even curiouser is the boy who seems to be following her everywhere. In a round about way, Brynn ends up following the boy to a secluded place where a competition is about to begin. The teens all go to a private school for con artists called Vale Hall. They organized a game to recruit a new student. Brynn is told that if she wins the game, she will be set for life and will get a full scholarship to any college.

Obviously I don't have to say more since this story is about Brynn and Vale Hall. Oh by the way, the author has done her own version of Odin, Brynhildr , and Valhalla. W hen the students are not studying to graduate, they work on different cons as per the wishes of their vigilante benefactor, Dr Odin.  So long as she follows the rules and keeps the school’s true intentions secret, Brynn could be set for life. She will be able to live at this school and earn more than enough money to pay for college, all she has to do is con a senator’s son, easy right?

Can Brynn turn off her empathy to work the long con and save herself? At several points in the book, Brynn doubts the path she is on, measuring the harm she might be causing against the good that comes out of it, as well as her personal debt to Dr O. It is an uneasy relationship, knowing whether you can trust other con artists to have your best interests at heart, and Brynn's relationships with other characters reflect that struggle. It also intrudes on her budding romance with another such student, Caleb, whom she finds drawn to.

Fans of Ally Carter and Jennifer Lynn Barnes will definitely enjoy reading this story. This is a story that starts out slowly, and rushes to the finish with plenty of twists and surprises waiting in store for the reader. It seems that no one is trustworthy, which makes everything more intense. I will definitely read the sequel which is coming out in 2020.