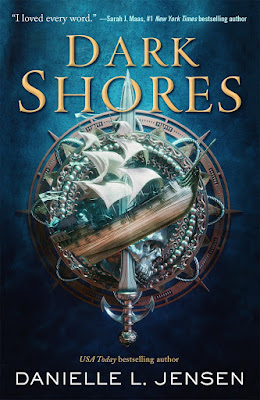 Piracy, blackmail, and meddling gods meet in this thrilling first novel in a commercial, fast-paced new YA fantasy series by Danielle L. Jensen

A PIRATE'S DAUGHTER
Teriana is the daughter of a trading ship captain. Her people have the sea in their bones, their ships are guarded by demigods of the Sea Goddess, and they are the only ones who know how to traverse the never-ending ocean between the East and the West.

A SOLDIER WITH A SECRET
Marcus is the leader of the Thirty-Seventh legion, the notorious army that has led the Celendor Empire to conquer the entire East. The legion is the only family he has, and even they don’t know the secret he’s been hiding since childhood.

A DANGEROUS QUEST
When a tyrannical ruler gains power in Celendor, he kidnaps Teriana’s mother and threatens to reveal Marcus’s deepest secret unless the two of them help him conquer the unknown West. The unwilling pair, distrustful of each other’s motivations, join together for the sake of their families, and must decide how far they are willing to go, and how much of themselves they are willing to sacrifice.

Dark Shores is the first installment in author Danielle L. Jensen's Dark Shores series. Things you should know. This series is based loosely on Ancient Rome. Instead of being called the Roman Empire, here it's the Celendor Empire. The story features dual narratives from 17-year old Teriana, the daughter the Captain of the Quincense and Marcus, the leader of the 37th Legion who has been brought back to Celendor for a mission that the two are forced to work together in order to save Teriana's people.

Teriana's people are seafaring (not calling them pirates) that rely on Gods to guide them on the seas. The Maarin are not controlled by the Empire. They can use any port, and are taxed just like other members of the Cel Empire. They also aren't tax with the so called son tax which says all families must give up their second born son to the Empire. They are also the only ones who know how to traverse the seas from one part of the world to the other using a kind of wormhole that is opened by one of the Gods.

Teriana finds herself as a political pawn in a much larger game after she inadvertently tells her best friend about the Six Gods which her people worship. Because of Teriana's betrayal, her mother turns her back on her and she's forced into a contract with Lucius Cassius where she is to lead a contingent of Celendor soldiers across the seas to a world that is being called the Dark Shore. Succeed and her mother and her people live, fail and they all die. What could go wrong?

Marcus is the leader of the Thirty-Seventh legion, the notorious army that has led the Celendor Empire to conquer the entire East. The legion is the only family he has, and even they don’t know the secret he’s been hiding since childhood. Marcus and his legion have a reputation for cruelty, but Marcus's own secret may be his downfall. A secret that Lucius Cassius gladly uses as blackmail in order to have Marcus and his men become political pawns. Cassius knows Marcus's true identity as well as his weakness and isn't afraid of revealing it to get what he wants which is world domination. He also uses Teriana's love for her people in order to blackmail her into leading Marcus to the Dark Shores and a way for other Celendorian Legions to follow.

The Empire controls all of the Eastern land masses while the West has been left to its own devices. There's even a saying that East shall not meet West under any condition. The West knows that if this happens, bad things will follow in its wake. The West worships a group of 6 Gods and Goddesses, with a 7th making all sorts of loud noises that could lead to even more violence and bloodshed. It is fair to say that there is a very large secondary cast of characters which I suggest that you keep copious notes so that you know which characters are the good guys and which are the bad ones.

If you like slow burn romance, Roman inspired Empires, power hungry politicians as the villain, and fast reads, this book is for you! If you like a mouthy heroine, they you will definitely get enough from Teriana while Marcus is the more stoic and driven character. There is a huge question hanging over this series and that is why a certain God allowed Teriana to spill secret information in the first place? Was this particular God trying to influence future events? One certain God even suggest that Teriana is the one who really matters when all is said and done. Curiouser and Curiouser.