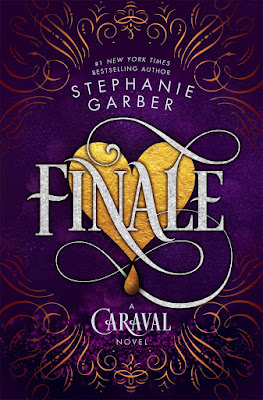 A love worth fighting for. A dream worth dying for. An ending worth waiting for.

It’s been two months since the Fates were freed from a deck of cards, two months since Legend claimed the throne for his own, and two months since Tella discovered the boy she fell in love with doesn’t really exist.
With lives, empires, and hearts hanging in the balance, Tella must decide if she’s going to trust Legend or a former enemy. After uncovering a secret that upends her life, Scarlett will need to do the impossible. And Legend has a choice to make that will forever change and define him.
Caraval is over, but perhaps the greatest game of all has begun. There are no spectators this time: only those who will win, and those who will lose everything.
Welcome, welcome to Finale. All games must come to an end…

Finale is the final installment in author Stephanie Garber's Caraval trilogy. The story takes place 2 months after the events of Legendary. Even though this story is told from both Scarlett and Donatella Dragna POV's, it is Tella that gets a huge chunk of the story. Just like she did in Legendary. Since the book is mostly about Tella, let's start with her. Tella has won Caraval but she hasn't received her prize from Legend who now has even bigger fishes to fry and more enemies to deal with.

Tella is enraptured every night in dreams wrapped in the magic of Legend while encountering the devious Jacks during the day. Tella and Legend are on a collision course with the Fates who were released in the previous installment. It is fair to say that Tella spends an inordinate amount of time thinking about Legend, her mother, and Jacks, a bastard of a fate who has decided that Tella is going to be his whether she likes it or not. Talia has always been brazen, reckless, and makes silly mistakes that come back to haunt her.

Tella must not only deal with Legend and Jacks, but the rest of the Immortal Fates who have returned to the Meridian Empire seeking a bit of vengeance. Meanwhile, Scarlett has chosen to meet with her ex fiance Nicolas who had thought she was dead, which leads to a game between him and Julian who disappeared for weeks, but now wants to focus all his time and energy on making up to Scarlett. One could honestly say that it was pretty apparent as to what the author had already intended before she started writing this book.

Scarlett's story isn't just about her and Julian, or her and Nicolas which is basically a blip on the radar, it is much more intense after meeting certain fates who might hold the key to her underdeveloped powers and a way to defeat them. She also has to understand that there is someone who wants her to become immortal and thus heir to the Meridian crown. Scarlett's story has been an interesting one from the beginning, and now that it is over, her ending is one that I am sure readers will be pleased with. It is fair to say that I was hoping for a more equal story between the sisters. But, such as life.