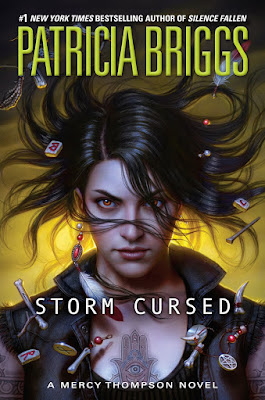 Mercy Thompson is back and better than ever in the new book in the #1 New York Times bestselling urban fantasy series.

Mercy Thompson has opened her garage again and is trying to get back to normal. Of course, now that the Tri-Cities are viewed as neutral ground, all kinds of supernatural beings are heading her way.

With her mate Adam Hauptman’s firm involved in providing security to a top-secret meeting with the US government and the fae, Mercy is tapped to handle everything else—including reports of a strange witch in town…

Storm Cursed, by author Patricia Briggs, is the Eleventh installment in the author's Mercy Thompson series. Everyone's favorite shapeshifting mechanic is back in action after her trials and tribulations in Europe. I will say this, if you haven't been keeping up with the releases in this series, you might find my review a bit on the spoiler-y side and for that I sincerely apologize. It is fair to say that there are a bunch of characters outside of Mercy that you, as a reader, should be paying attention.

In fact, all of the characters who are important to Mercy and have been part of this series from the beginning, play roles in this story. Especially when things are really getting down to the brass tacks. Once upon a time, a few books ago, Mercy brazenly proclaimed that the Tri-Cities are under the protection of the Columbia Basin Wolf Pack. Mercy, Adam, and the Pack have busy dealing with a variety of hot button issues including those intent on encroaching on their Territory and causing major problems for everyone involved.

Not everyone is thrilled that the pack has taken such a stand, but mostly it's just the typical haters who despise anyone who is different from them. As the story opens, Mercy, Ben, Mary Jo and Larry the Goblin King are called in to take care of a marauding Gremlin. If that isn't enough to whet your whistle, Mercy & gang are asked by a local sheriff to investigate the report of zombified goats. Yes, you did read that right!

Soon thereafter, Adam informs Mercy that the pack is going to play bodyguards for the upcoming summit between the US government and the Fae Gray Lords. A summit which has been long in the making and could finally bring peace to both humans and fae and ensure that there's not devastation left behind from a war that nobody would win. But, if you think that the author is going to let Mercy and gang off easily, you've got another thing coming!

She has to add on some pretty evil and twisted enemies who have no inclination of allowing the peace treaty to go forward. As I said before, new and old characters come together to help Mercy keep the peace and thwart the villains. These include Elizaveta, Zee & Adam, Stefan, who Mercy is bound to, as well as Sherwood Post, who came to the pack from Bran's pack, Wulfie, who has plenty of sarcasm and humorous lines, and Uncle Mike just to name a few.

I have to say that my favorite characters in this book were Sherwood and Wulfie. Wulfie is such a shocking surprise considering what he's done in the past, and Sherwood, well, readers will get plenty to ponder after reading this book. I have to say that Marsilia, the lead vampire, is actually growing on me. She and Mercy may butt heads, but when it comes right down to it, they both need each other to protect their people.

I did have one minor complaint......what the hell was the author thinking when she wrote THAT ending? I'm not going to spoil the ending, but a major character makes a curious statement and now, we have to wait another year, or two before we find out what he actually meant! Rude!