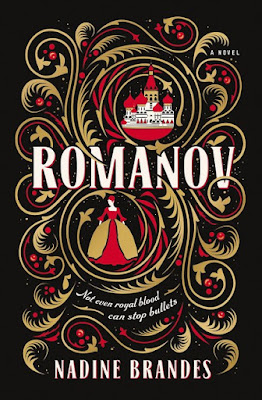 
From the author of Fawkes comes a magical take on the story of Anastasia Romanov.

The history books say I died.

They don't know the half of it.

Anastasia "Nastya" Romanov was given a single mission: to smuggle an ancient spell into her suitcase on her way to exile in Siberia. It might be her family's only salvation. But the leader of the Bolshevik army is after them . . . and he's hunted Romanov before.

Nastya's only chances of survival are to either release the spell, and deal with the consequences, or enlist help from Zash, the handsome soldier who doesn't act like the average Bolshevik. Nastya's never dabbled in magic before, but it doesn't frighten her as much as her growing attraction for Zash. She likes him. She thinks he might even like her . . .

Nadine Brandes Romanov is a historical fantasy novel set during the early 20th century (1918) when Lenin's communist revolutionaries ended the Romanov dynasty in a bloody coup that is still being talked about in most history books. I encourage people to read this book up to the point where history and the author's own story diverge. The history of the Romanov's end and what evil was done to them by Lenin's revolutionaries, and his Red Army, was absolutely brutal and unnecessary.

As a admitted history nerd, I appreciated the fact that the author didn't try to cover up the horrors that happened to the family or those who failed to join the revolution. Anyone who thinks Communism is amazing, really needs to read actual history, and not history distorted by others who have an agenda. Lenin killed people as though they were throwaway garbage instead of human beings. Was Nicolas Romanov a saint? No, and Russian historians have gone as far as to blame him a whole bunch of things whether it be true or not.

There have been a variety of stories about Grand Duchess Anastasia Nikolaevna Romanov and whether or not she actually survived the July 17, 1918 massacre that happened to her entire family and those who were allowed to remain with the family. Anastasia was the youngest daughter (16) of Tsar Nicolas II, the last sovereign of Imperial Russia and Tsarina Alexandra Feodorovna, who had connection to Queen Victoria of England. She had three older sisters, Tatiana, Olga, Maria, as well as one brother Alexei who really did have hemophilia.

In this story, Nastya is portrayed as a girl who is a bit on the mischievous side, but not overly rebellious towards her father or her siblings. She questions her mother's relationship with Rasputin who is said to have been trying to help cure Alexei's hemophilia. In fact, the Russian people were said to be very angry with the Empress for her secretive nature and perhaps a bit on the cold side as well. As the family is moved from one place to another, Nastya is given responsibility of a magical matryoshka doll which might be the families only salvation from those who want to see them dead.

Nastya's relationship with her father was adorable and heart breaking. Her relationship with her sister Maria was also emotional. Yet, it was Nastya's connection to a Bolshevik Soldier named Zash, who first comes into the picture in Tobolsk and then continues on to the fateful night when Nastya and her family are executed, that opens the story up. Zash is a character who starts out as a hard, solid, defensive and dutiful soldier that you think you’re going to hate until you don’t, then surprises you when you really think there is no hope.

Zash is a fictitious character that the author uses as a way to tell her story. However, there are fair number of real historical characters who triggered the events leading to the killing of the Romanov's. As background for the story, the author uses persistent rumors that Nastya and her brother Alexei somehow escaped the brutality of what happened to their family. The fact that in real life, their bodies weren't found until the USSR came to an end, fuels even more speculation.

At the heart of Romanov is a story about loyalty, seeing beyond who is the enemy, while giving people second chances. It is said that even some Bolshevik soldiers fell in love with the Romanov family, thus causing changing of the guard many times until there was no more room for hope for the family. Even though this book is a "retelling" that leans towards the historical fantasy genre, I still give the author plenty of props for doing her research on the Romanov family and the tragedy that fell on them.