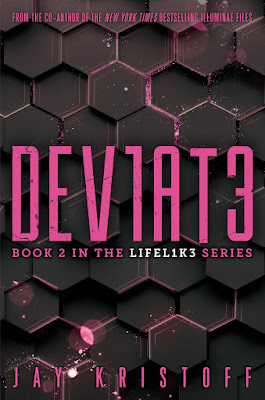 From bestselling author Jay Kristoff comes the second installment in the LIFEL1K3 trilogy—hailed by Marie Lu as “a breathless, action-packed exploration of what humanity really means.”
In the wake of a climactic battle in the ruined city of Babel, two former best friends suddenly find themselves on opposite sides of the same quest. Eve is torn between the memories of the girl she was, and the synthetic she’s discovered herself to be. Together with her lifelike “siblings,” Eve sets out to find the real Ana Monrova, whose DNA is the key to building an army of lifelikes. Meanwhile, Eve’s best friend, Lemon, is coming to terms with a power that she has long denied—and that others want to harness as a weapon. When she meets a strange boy named Grimm, he offers to lead her out of the horror-ridden landscape and to an enclave of other abnorms like herself. There, Lemon quickly finds a sense of belonging—and perhaps even love—among the other genetic deviates. But all is not what it seems, and with enemies and friends, heroes and villains wearing interchangeable faces, Lemon, too, will join the race to locate Ana Monrova before her former best friend can get to her.

DEV1AT3 is the second installment in author Jay Kristoff's LIFEL1K3 trilogy. In the wake of an uprising in a post-apocalyptic USA, the robotic populace have been reduced to slaves, and androids (robots who look like humans) have been outlawed. LIFEL1K3 was about a girl named Eve and her best friend Lemon who find a ruined android in a scrap heap; an almost-boy named Ezekiel, who knows the truth behind the robotic revolt and has been searching for one Ana Monrova.

While LIFEL1K3 gave readers the making of a villain in Eve, DEV1AT3 focuses on Lemon’s rise to claim her destiny as a hero. The story itself alternates between Lemon, Ezekiel, Cricket, as well as Evie who made an interesting choice at the end of the previous installment. The story begins 5 hours after Lemon, Ezekiel, and Cricket escaped Babel Tower and the revelations that have no divided one best friend from the other. After a short fight for their lives, Lemon, Ezekiel and Cricket end up going in different directions for pretty much the entire length of this story. So, let's start with Lemon.

Lemon is coming to terms with a power that she has long denied. She is also being hunted by Daedalus who wants to use her for her powers that can be used as a weapon between two conglomerates who are fighting over world dominion. Lemon is her usual sassy self and we see her delve further into her abilities, bolstered by those who are like her. While searching for Ezekiel and Cricket, she meets a boy named Grimm. Grimm, Fix, and Diesel are like her. They are considered to be abnormal. Lemon finds a sense of belonging among the other genetic deviates. But all is not what it seems, and with enemies and friends, heroes and villains wearing interchangeable faces, Lemon, too, will join the race to locate Ana Monrova before her former best friend can get to her.

Meanwhile, Cricket who was given a new body in the previous installment, finds himself being sold to the Brotherhood and is forced into fighting in the War Dome. If you know anything about Cricket, he is fiercely loyal to Evie, as well as Lemon. He hates being separated from his friends, but with the Brotherhood in control of the city where he now is forced to fight other Bots, it will take a miracle for him to escape and be reunited with Lemon. Cricket finds a way to unlock the 3 laws which are an imperative for all bots. This actually is pretty straight forward but adding in Solomon was a nice touch by the author.

Ezekiel is the hardest character for me to review since he has been forced into considering new avenues after finding out the truth about Eve, and the fact that the real Ana who he is in love with, is now a target for Evie and her L1felike brothers and sisters. Ezekiel ends up being teamed up with the dreaded Preacher for a great chunk of this story. He also ends up attempting to remind Evie that she isn't like the rest of her brothers and sisters who want to destroy humankind. But, will Evie listen, or will she go full villain?

Evie is such a twisted character which is typical of the author. He loves making them as conflicted as possible, and then laughs when the readers scream bloody murder for what happens when he tosses in a bunch of twists and turns and some curious questions as well. Is Evie really a villain? Or, will she rediscover that ending the human race isn't what she really intends to do? How can she possibly have feelings about Ana who she was modeled after while at the same time, hoping to find and take her DNA to open even more devastating wars?

DEV1AT3 introduces a new life form called Hunter. Their purpose is to hunt down high priority targets like Lemon. Lemon somehow managed to catch the eye of BioMass, and now Hunter is on her trail. These beings that blur the line between organic and artificial life make questions of robotic autonomy even harder to answer. Plus, there is the creep factor where these Hunters use bees to do their dirty work.

It is fair to say that in Jay Kristoff fashion, there is a brilliantly devious cliffhanger ending that leaves just about every single character hanging on for dear life. Will Lemon be able to stand and deliver? Or, will she become a pawn between Daedalus and BioMaas? Will Eve really become a villain, or will she discover a way to step back from the newest attempt at destroying the world? Will Ezekiel ever find happiness again, or will he crash and burn once he has to face his family one last time?