#Review - Sword in the Throne by Helen Savore #Fantasy 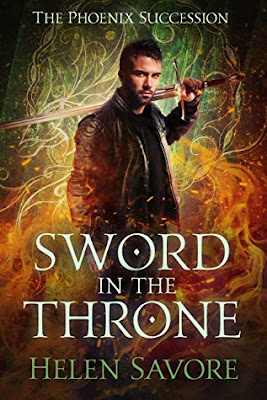 Can you craft a weapon out of healing?

Jamie discovers his hallucinations are fae spirits stealing life, and joins his childhood friend Drea in her quest to banish them. Along the way he accidentally unlocks a traitor’s healing ability, who in turn uses it as a sign to prove he is King Arthur returned. Drea has given up on the Phoenix but Jamie has not, and learns more about his magic from Viviane’s family. Not satisfied with the grail, the false Arthur’s search now spans both the the faewilds and the Earth.

Can they stop the impostor Arthur’s crusade when the one thing they need most to stop the fae is the most sure sign of Arthur’s return itself… to draw the Sword from the Throne.

Sword in the Thorne is the second installment in author Helen Savore's The Phoenix Succession series. After the so called Investiture failed, and since there will be no Phoenix any time soon, the story actually focuses more on Jamie than it does Alexandrea. After the events of the previous novel, Drea has been rethinking her life goals while Jamie has to travel to Llehfin to become the first Human life smith. After all, a deal is a deal, and Jamie needs to come to terms with the new reality he walked in by allying with Drea and Moralynn.

Jamie arrives in Llehfin knowing that he is a hostage to hold Moralynn to her agreement with Viviane, the Lady of the Lake. The issues become that much clearer and dangerous when Oberon declares war on the Llehfin in hopes of finding the person who is supposed to be Arthur reincarnated. Meanwhile,Drea is adrift without Moralynn around who fled to Annwn & Arthur's sword is still stuck in Oberon's throne. To make matters even more twisted, Adhomai believe he's Arthur reborn.

Moralynn makes a choice that until the Phoenix flies again, the fae will stay dead and not reincarnate as they have done over the ions. While Moralynn apparently has the scabbard and the grail, Adhomai is destroying the human world looking for the Regalia and Arthur's artifacts so that he can prove that he truly is Arthur reincarnated. Drea really ends up being more or less castaway in this book as she knows now that she will never become the Phoenix even after years of being told that was her destiny. Her so call mentor has abandoned her, and Jamie, who she dragged into this world, has made a deal which will see him grow even more as a character along with some surprising revelations and twists. After 1,000 years of Arthur being gone from the world, could he finally have returned?

While I was surprised that the author focused more on Jamie than on Drea, the cover of the book itself is a clue that he will become the focal point from this point while Drea is being subjugated to not having any role at all. The ending didn't work for me as it left so much unanswered questions and as I said, left Drea adrift while Jamie now gets to play the role of a lifetime. Who knows that the author has in store for her next installment? Guess we'll find out!