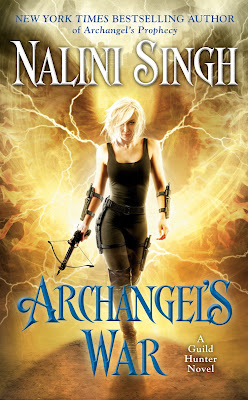 The world is in chaos as the power surge of the Cascade rises to a devastating crescendo. In furiously resisting its attempts to turn Elena into a vessel for Raphael’s power, Elena and her archangel are irrevocably changed. . .far beyond the prophecy of a cursed Ancient.

At the same time, violent and eerie events around the world threaten to wipe out entire populations. And in the Archangel Lijuan’s former territory, an unnatural fog weaves through the land, leaving only a bone-chilling silence in its wake. Soon it becomes clear that even the archangels are not immune to this deadly evil. This time, even the combined power of the Cadre may not be enough. . . .

This war could end them all.

Archangel's War is the Twelfth installment in author Nalini Singh's Guild Hunter series. The story picks up months after Archangel's Prophecy with Elena trapped inside a chrysalis cocoon but she soon awakens. The Cascade fundamentally changes both Elena and Raphael in ways that readers will soon understand and for good reason. It's all part of Cassandra's prophecy. The cascade still threatens the world and is causing all kinds of weird issues.

Disasters are occurring across the world, ice storms and plagues of locusts, monsoons and wildfires. The Ancients are waking from their centuries-long slumber, and when they wake, chaos tends to follow. But, the one thing that is unavoidable is China's Archangel Lijuan who is up to something so horrific, that it will lead to a massive war. A war that will encapsulate all of the members of the Archangel Cadre as well as Ancients.

Lijuan has become ultra-powerful and absolutely mad. The Cadre must over come past animosities, and come together to face the threat that could destroy everything and everyone. The book has two distinctive parts. The first part focuses on the evolution of Elena and Raphael. When they emerge from the chrysalis, they are no longer the same but I'm not going to go any further than that. Remember that the Cascade has plans for everyone but so does Cassandra's prophecy.

The final part of this book is the best part of the book. Elena and Raphael stand for New York against a horde of Lijuan's impressive enemies that you won't won't want to miss. As far conclusions to a story arc, goes all out with this story. She holds absolutely nothing, and I mean, nothing back. The war is bloody and devastating and unfortunately not all of your favorite characters survive. Raphael, Elena, and the Cadre won't be the same after this war.

Some of the more interesting aspects of the story involve Raphael's past, as well as Bluebell's parentage. One could say that this is the culmination of the past Eleven books and from here, who knows what will happen next? Obviously, there are things that the Cadre needs to deal with. Raphael and Elena’s relationship continues to evolve and grow; their love even stronger for all they’ve been through. I adore Elena's relationship with her sisters, as well as Bluebell, Dmitri, the Guild Hunters, as well as Izzy who has become one of Elena's personal guards.

But things were altering in front of them, a faint glow emanating from where the aeclari had been before the filaments obscured both Raphael’s body and Elena’s chrysalis.

Beyond the balcony doors now partially covered with the snow silk of the filaments, the Bluebell turned. His eyes widened at seeing the ocean of filaments, the glow. But before he could open the closed doors, a familiar voice entered all their minds.

Leave now. It was an order from an archangel. Clear the skies above. Empty the land around. GO.

The Legion were moving even as the last word echoed in their minds. They were Raphael’s Legion, Elena’s Legion, and they had been given an order. The Bluebell wasn’t Legion. He was one of the Seven. Unique. With his own mind.

Torment wrenched his features, but he inclined his head, and the Primary saw him form the word “Sire.”

All of them moved.

The Bluebell dropped to the grass, then ran inside the house.

The Legion broke into four parts and swept the area. Winged beings were already flying toward the river at high speed, their faces stark and their jaws determined. The Legion dropped down in front of cars moving on the nearest road. The cars were not so close to the aeclari’s home, but the archangel hadn’t said how far to clear.

When the first two cars halted with a screech that caused a burning scent to rise to their nostrils, the Legion wrenched the doors open and hauled the startled vampires out. A group of the Legion rose into the air, two to a vampire. Another group found four humans in a third car, a vampire’s cattle heading home. The scared cattle whimpered at being taken by the Legion but didn’t struggle. Neither did the vampires after they saw the angels racing from the Enclave to the water.

Golden light poured from the windows of the aeclari’s home.

Many of the angels streaming over the water held vampires or humans in their arms, getting their households out of danger. The Bluebell was one of the last to fly out of the Enclave, and though the Legion did not speak to many outside of the aeclari, they spoke to him: Are the aeclari’s people safe? This was important. The Legion knew. The aeclari had bonds to those who lived in the house.

Yes, I got them out. The Bluebell, who could fly faster than the Primary and sometimes raced with the cars of the Blade and the Viper, fell off the cliff with his wings licked by a golden light so bright that it was difficult to face. In one hand, he held a large rectangular thing, in his other, items they recognized.

Several of the Legion flew to him, and took the things. They did not understand things, but these were linked to the aeclari in their mind.

Most of the angels kept on flying toward Manhattan, and those of the Legion that carried vampires or mortals kept going, too. But the Primary turned once he was over the center of the river, as did those of his brethren who flew only their own bodies.

The Bluebell halted in front of them, the silvery blue of his wings spread and his face awash in the scorching light that had turned the river to gold.

Until at last, the light was so bright that it became fire and even the Primary couldn’t bear it and threw up his arm in front of his eyes. The last thing he saw was an intense white brilliance. 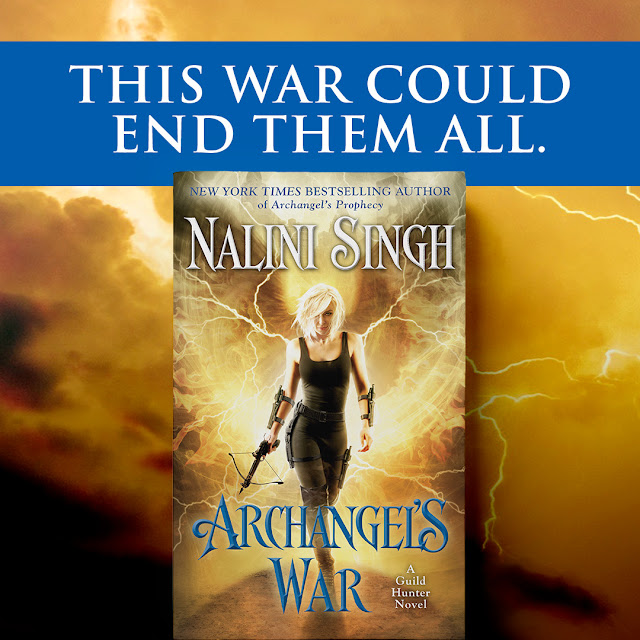