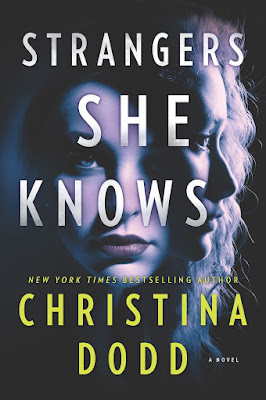 I have three deadly problems:

2. I just had a bullet removed from my brain.

3. My new daughter is growing up too fast—and she’s in the line of fire.

Living on an obscure, technology-free island off California means safety from the murderer who hunts Kellen Adams and her new family…or does it? Family time becomes terror-time, and at last, alone, Kellen faces a killer playing a cruel game. Only one can survive, and Kellen knows who must win…and who must die.

Strangers She Knows, by Christina Dodd, is apparently the final chapter in her Cape Charade series. I recommend that future readers read the series in order as it follows the main character Kellen Adams through a series of hair raising adventures. I haven't read the in-between novella's, so I might be a hypocrite in telling other readers to do so. However, the story will make more sense to you if you have read the others. In this episode, Kellen Adams is healing after brain surgery but things quickly escalate when Kellen's former best friend/nemesis escapes from Federal prison.

Kellen, her husband Max DiLuca, and their daughter 10 year old Rae, end up on a world wide hop, skip and jump until they land on a small island off the coast of California. The old mansion on the island has an unhappy history as we learn through a diary from a character named Ruby and the isolation and atmosphere seems to have a disturbing affect on the mental health of the current caretakers of the island who seem to hate the DiLuca's. Then, the unimaginable happens, Mara Philippi an escaped serial killer who promised to take everything away from Kellen the way she feels Kellen took everything away from her, arrives.

In this story, Kellen has three serious issues to deal with. (1) Mara who showed up at her wedding looking for a confrontation. But, Mara doesn't really understand why Kellen isn't up to her expectations after brain surgery. (2) Having a bullet from the brain is not an easy procedure and the physical therapy that is involved may be overwhelming to anyone else but Kellen who has survived some brutal situations over the course of this story and her years in the military. (3) Rae has become a handful. She had to grow up fast not knowing if her own mother would recognize her, or even love her. But, they've had their own adventures in this series.

Overall, this may not be the strongest book in the series. The pacing in the first half is a snail pace as we have to be reminded of previous events, and watch as Kellen struggles to regain her strength and the use of her hand which includes piano lessons. It is fair to say that there is a large gap between this book and the previous one that is apparently covered in Hidden Truths. I think the author truly spent too much time with Ruby and her background on Isla Paraiso. I think it's good that this may be the final book in the series as the ending apparently shows that Kellen and family are prepared to move on to other things, literally. I hate to reign crap down on Rae's shoulders, but she is like nails on a chalkboard at time. Of course, this is a typical reaction to a youngster who lives on the internet, and must be connected to the internet and her friends 24/7.