#Review - A Treason of Thorns by Laura E. Weymouth #YA #Fantasy 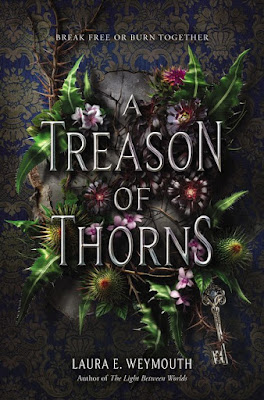 
This stand-alone historical fantasy by Laura E Weymouth, critically acclaimed author of The Light Between Worlds, is perfect for fans of The Hazel Wood and Caraval.

A House left unchecked will lead to ruin. But I will not let it ruin me.

Violet Sterling has spent the last seven years in exile, longing to return to Burleigh House. One of the six Great Houses of England, Burleigh’s magic kept both the countryside and Violet happy. That is, until her father’s treason destroyed everything.

Now she’s been given a chance to return home. But Burleigh isn’t what she remembered. Wild with grief, Burleigh’s very soul is crying out in pain. As its tormented magic ravages the countryside, Vi must decide how far she’s willing to go to save her House—before her House destroys everything she’s ever known.

Dark, gripping, and utterly unique, this atmospheric historical fantasy from critically-acclaimed author Laura E. Weymouth balances danger and intrigue on a razor’s edge as one girl defies all to save her home and her heart.

"A good Caretaker puts her House first. Before king. Before country. Before her own life."

A Treason of Thorns by Laura E. Weymouth is a fantasy YA standalone novel. Protagonist Violet Sterling once lived in Burleigh House, one of the 6 great houses in England. Due to the actions of William the Deedwinner, these houses have been bound to the throne and are tended to by hereditary Caretakers. 7 years ago, Violet was banished from her house due to her father's treasonous actions.
While he was sentenced to house arrest only to be broken by his death, Violet was banished to a small fishing village with her caretakers Mira and Jed. 7 years later, a messenger from the King Edgar arrives with news. Violet knows her father is dead, but what about her friend Wyn who stayed behind? Violet chooses to return to the house she loves and the friend she left behind. She learns that Burleigh House has turned dark and it's destroying everything around it.
Burleigh is its own character. It has its own personality, its little quirks, and its own feelings. The House is a rather large part of the story itself in every way. Violet is given a few months to bring Burleigh to heal, or King Edgar will burn it to the ground since it has refused every new caretaker since Violet's father passed. Violet finds some unusual help in Esperanza, Princess of Wales, who has been trying to find a way to free the Houses from Edgar's clutches.

One of the strangest aspects of this story is Violet's love for the House. Violet was brought up by her father to love the house and its magic, to devote her life to Burleigh, especially when she is older and becomes the caretaker.  She loved everything about Burleigh to the point of obsession. After 7 years, Burleigh House is a shadow of its former glory and Wyn is haggard in appearance and doesn't want Violet to stay. He wants her to go back to her fishing village and enjoy the rest of her life.

Yeah, that's not happening. Violet and her new friends desperately try to find the hidden secret that is needed to save them all. Vi is stubborn to a fault, and is consumed with the need to put her house before anything and anyone. Even herself. Can she save the House she's loved since she was a child? Can she save the boy who she left behind with her father? Or, will the King win in the end?

I loved Frey, the woman who knew Violet's father and offered her a chance to become a barmaid while also saving the House she loves, and the land that is slowly dying. I loved Mira and Jed who put everything they had in making sure Violet didn't go without support or love. Espie wasn't your usual stick in the butt royal who didn't give a crap about the House or Violet's attempts at fighting history. While A Treason of Thorns might not be one of my an all time favorite, I would not tell anyone to stay away from the story.