#Review - Chasing the Shadows by Maria V. Snyder #YA #SyFy 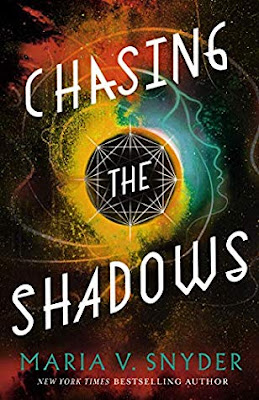 Okay, so I only died for sixty-six seconds. But when I came back to life, I got a brand new name and a snazzy new uniform. Go me! Seriously, though, it's very important that Lyra Daniels stays dead, at least as far as the murdering looters, know.

While dying is the scariest thing that's happened to me, it morphed my worming skills. I can manipulate the Q-net like never before. But the looters have blocked us from communicating with the rest of the galaxy and now they believe we've gone silent, like Planet Xinji (where silent really means dead).

A Protector Class spaceship is coming to our rescue, but we still have to survive almost two years until they arrive - if they arrive at all. Until then, we have to figure out how to stop an unstoppable alien threat. And it's only a matter of time before the looters learn I'm not dead and returns to finish what they started.

There's no way I'm going to let the looters win. Instead I'll do whatever it takes to save the people I love. But even I'm running out of ideas...

Chasing the Shadows is the second installment in author Maria V. Synder's Sentinels of the Galaxy. It has been 8 days since Lyra Daniel's funeral. It has been 8 days since Lyra took up the name Ara Yinhexi Lawrence in order to keep the fact that she is alive from Jarren, the looter/former friend who tried to kill her. If he finds out she's alive, he will come after her again. Ara is now Junior Security Officer Lawrence working with the Chief of Security Tace Radcliff and his son Niall. As you may recall, Ara's parent's are renown archaeologists who focus on Terra Cotta Warriors who were originally found in China in 1974.
Ara and crew still have to deal with the looters they captured at the end of the last story. They have absolutely no back-up, and the nearest Protector class ship is at least 18 months away. They also have to deal with the Hostile Life Forms (shadow blobs) that only she can see after she accidentally touched one of the Warrior hearts. Her worming skills took a giant leap forward when she died, but she needs to worry about letting Jarren know she's catching up to his skill level. Ara is still one of those stubborn, impetuous, and just generally a stereotypical “I don’t have to listen to anyone” teenagers who is actually quite brilliant.
Ara doesn't get as much credit for the good things she's done. There are those who even think she's over stepping her role. She's constantly trying to prove herself to those she works with, especially her overly protective parents. Her relationship with Niall takes a major step forward in this book even though both are working in security and both have major responsibilities to keep the scientists and rest of the security detail safe. Ara doesn't want to lose anyone else. Not if she can help find a way to get a message to DES (Department of Explored Space) and warn them about what is happening to other planets that have Warriors on them.
There are a whole lot of reasons to keep reading this series. As I said before, Ara's makes a choice to explore the deepest parts of Q-net where nobody has gone before. What's even more amazing is when Q-net actually starts having conversations with her and recognizes the Hostile Life Forms for what they are. Ana is like a comet; burning brightly, doing impossible things, going full speed, no sense of self-preservation. She'll eventually burn herself out. The more the author digs into the Warriors themselves, the more I am intrigue to the possibilities to come. After all, what is the name of this series?