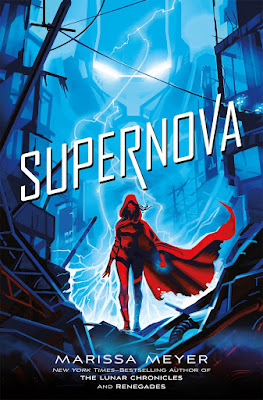 All's fair in love and anarchy...

The epic conclusion to Marissa Meyer's thrilling Renegades Trilogy finds Nova and Adrian struggling to keep their secret identities concealed while the battle rages on between their alter egos, their allies, and their greatest fears come to life. Secrets, lies, and betrayals are revealed as anarchy once again threatens to reclaim Gatlon City.

Supernova is the third and final installment in author Marissa Meyer's Renegades trilogy. The story once again alternatives between Nova Artino nee McLain (Nightmare & Insomnia) and Adrian Everheart (Sketch & Sentinel). The aftermath of Archenemies is immediately felt. Nova was successful in stealing back Ace Anarchy's helmet, but in the aftermath, Max was left as a innocent victim of her fight with the Renegades. Several Renegades where hit with Agent N thus making them basically human. Nova could be exposed at any moment.
From the first book onward, Nova thought that the Renegades were to blame for the tragic death of her parents and little sister Evie. Where were they with their promises to protect her family? It was Ace who took her in and raised her to be an Anarchist with the ability to put someone to sleep with only a touch. One could call it brainwashing. After all, Nova spent her life with Leroy, Honey and Phobia believing Ace was her hero and the Renegades were true villains. Nova's walk between doing what's right, and doing the wrong thing, was a tightrope that I was glad to have read.
Adrian hates Nightmare, but is absolutely in love with Nova. Adrian is the son of two Renegade Council members as well as the son of Lady Indomitable who was killed by someone unknown to him. Adrian has spent his life trying to find the person who killed his mother. He has a remarkable talent for using tattoos to make his alias Sentinel even more impressive. He adores his younger brother Max, but will his secret finally be revealed to his fathers as to who he has been spotlighting as? What will he do when it discovers Nova's true identity?
There are so many surprises and revelations in this story that to actually spoil any of them, would defeat the entire idea of reading the book for yourself. Nova's world definitely becomes much, clearer in this book after a series of events that leads to a massive reveal. The villains are not necessarily villains but they do villainous things in this book that leads to a major conflict between the Renegades and Anarchists. The heroes are definitely not what you would expect. After all, who uses a chemical agent to neutralize anyone with powers? Instead of using law enforcement to carry out justice, they choose who gets to live with their powers or not.
I adored Max and the author doesn't let readers down by putting Max into the thick of things when the final conflicts are brought to bear.  I liked how Adrian and Nova explored the gray areas between "good" and "evil". That. Ending. Killed. ME! Seriously! Read the book, but pay particular attention so that when a certain character pops up in the Epilogue, you don't scream, WHO THE HELL WAS THAT? like I did because I'm an idiot.
I can't imagine what was going through the author's head when she thought let's introduce this character, forget about her except at key moments, make it as though Nova hated her guts, and then slam the readers in the head with the most shocking revelation imaginable and then close the story as though nothing happened! I demand a recount! I demand another story featuring this character! I want her to find her own happy ending and discover the truth that's she not alone! I really thought about lowering my rating after the identity was revealed to me since I apparently slept walked though part of the book!