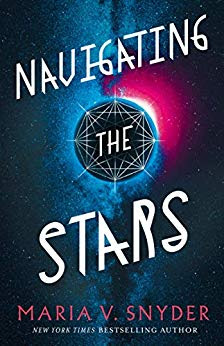 “The answer is no, Lyra,” my mother utters her favorite—I swear—phrase.

No means I have to travel with them to another planet—again.

No means leaving all my friends fifty years in the past. Thanks, Einstein.

Seventeen-year-old Lyra Daniels can’t truly blame Einstein or her parents for their impending move across the Milky Way Galaxy. It’s all due to the invention of the Q-net, which made traveling the vast distances in space possible—with one big caveat: the time dilation. But that never stopped Lyra's ancestors from exploring the Milky Way, searching for resources and exoplanets to colonize. What they didn’t expect to find is life-sized terracotta Warriors buried on twenty-one different exoplanets.

As the Galaxy’s leading experts on the Warriors, Lyra's parents are thrilled by the new discovery, sending them—and her—fifty years into the future. Her social life in ruins, she fills her lonely days by illegally worming into the Q-net. The only person close to her age is the annoyingly irresistible security officer who threatens to throw her into the brig.

After the planet they just left goes silent—meaning no communications from them at all—security has bigger problems to deal with than Lyra, especially when vital data files go missing. But that's just the beginning, because they’re not as alone as they thought on their new planet... and suddenly time isn't the only thing working against them.

Navigating the Stars is the first installment in author Maria V. Snyder's Sentinels of the Galaxy. As the story opens, it is the year 2471. 17-year old Lyra Daniels is the daughter of two prominent archaeologists who have focused their mission on discovering locations of Terracotta Warrior that were originally found in China in 1974. Lyra's parents along with a cadre of experts are heading for Planet Yulin, one of 22 known planets to have Terracotta Warriors. Lyra doesn't want to travel 50 years into the future leaving her friends and her plans on going to college, behind.
But, since she is underage, she has no choice. All of the warrior planets have been named after Chinese cities. Lyra's mother is Chinese, while her father is English. Two things impressed me about this story. The Terracotta warriors as well as the time crinkling and space travel. While it may take 90 days to travel from one planet to another, it's actually 50 years to arrive at your destination thanks to a time crinkling. So, when it was 2471 when she left Planet Xinji, it will be 2522 when she arrives at Planet Yulin. While here on Earth there are 6,000 Terracotta warriors, someone has created 24 million warriors.
Were they made on Earth and brought elsewhere, or made elsewhere and brought to Earth? Lyra is an interesting character to follow. While she is 17 actual years old, she really is over 100 years old since she's already been to several other planets with her parents and has had to face the dreaded time dilation that comes with space travel. Onboard the ship to Planet Yulin, Lyra meets Niall Radcliff. He is ship-born and ship-raised and the last thing he wants to do is make friends with a passenger. Once passengers leave the ship they are never again part of the crew's life.
He's grumpy but attractive and a little bit too law-and-order for her. Lyra decides to do some exploring in the Q-net which is a vast computer network that does everything from storing all data to managing space flight. She's a hacker and a really good one thanks to her friend Jarren who taught her to worm through the Q-net without being caught. However, she does get caught. Niall's father and Harrison, the ship's captain, decides to make her an intern for those who navigate the ship rather than place her in detention for her worming. There she learns much more about the Q-net and about navigating through space.
Lyra soon discovers that all of Planet Xinji's files have gone missing and the planet itself has gone dark. Her friend Lan was left behind on Xinji so this really concerns Lyra since Lan apparently made a shocking discovery. Someone isn't playing by the rules and has somehow found a way around the time dilation. While she does have a tendency of whining a bit too much in this story, she is pretty damn smart. She's in the thick of things almost from the arrival on the planet. Lyra discovers the way into a unknown lower level beneath the pits which contains devices, more warriors, and hearts covered with alien symbols.
When she picks up a heart, it crumbles in her hand but it also lets her see shadow blobs that are also in the pits. Unfortunately, she's the only one who can see them which leads her to being questioned about her sanity. While most of the adults refuse to listen to her, it becomes apparent that she's not wrong when she's shot at by looters who are out to destroy the warriors, while also collecting certain ones for wealthy donors. She also has to face the fact that Niall isn't all that bad, and that her former friend may be out to ruin her life.
Her relationship with her parent's isn't all that antagonistic. Her parents genuinely want the best for Lyra even when she steps over the line and ends up in trouble. She's often called pampered, or Queen of Yulin, or a mastermind, but she refuses to back down when she learns that she has unlocked major discovers. I have subsequently read the second book in this series since this book ended in a way that gave me the push to borrow the book via Kindle. This series is pretty damn good. This book didn't get bogged down by romance, but it didn't ignore it either.