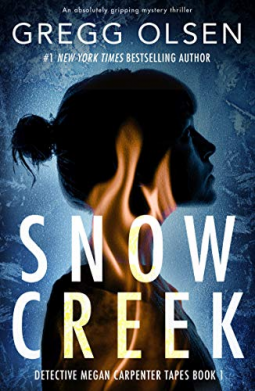 Footprints were scattered about like fallen leaves. She looked down into the ravine, and once more her lungs filled with fear. A body, blackened and motionless lay splayed out in the bushes.

Detective Megan Carpenter is no stranger to evil. Escaping the horrors of her old life, she’s vowed never to let anyone hurt her or those she loves ever again. Joining the small police force in Jefferson County’s Port Townsend, Megan is determined to get every victim of a crime the justice they deserve.

So when Ruth Turner walks into the Sheriff’s office claiming her sister Ida Watson has been missing for over a month, Megan’s instincts tell her that she needs to do more than just file a report.

Arriving at a secluded farmhouse in the hills above Snow Creek, she finds Ida’s teenage children alone and frightened.

Then a few days later, close to the Watson's home, the blackened body of a woman is discovered in an abandoned pickup truck.

Megan must unravel the disturbing secrets of the isolated Snow Creek community if she is to catch the killer.

But Megan has dark secrets of her own too…

Hidden in the back of her closet is a box of tapes containing every single recording of her therapy sessions with Doctor Albright over thirteen years ago. As Megan begins to play the tapes, she’s taken straight back to her terrifying childhood, back to the time she was a kid called Rylee, fighting to survive.

Can Megan finally confront the past she’s spent years trying to block out and will listening to her own painful story help her solve the complex case she is now entangled in?

Snow Creek is the first installment in author Gregg Olsen's Detective Megan Carpenter series. The story is largely set in and around Port Townsend and Snow Creek, Washington. Megan Carpenter is a Detective for the Jefferson County Sheriff's Office. As the story opens, Ruth Turner claims that her sister Ida has been missing for over a month. Apparently, Ida and her husband Merrick were planning on going to Mexico to some orphanage but haven't been heard from since.
Megan soon starts her investigation by doing a welfare check on Ida and Merrick's teenage children Joshua and Sarah. Something is really not right with not only Ida and her family, but Ruth's as well. The investigation into the Merritt's disappearance heightens when a burnt out truck with the body of a dead woman is found in a nearby ravine thanks to intrepid cryptozoologists searching for Sasquatch. With the mystery of Ida’s whereabouts solved, Megan has to figure out what happened to Wheaton.
With Sarah telling Megan that her father was abusive, Megan has even more to go on.The race is on to find Merrick and bring Ida’s killer to justice begins in earnest. But as further evidence is uncovered Megan starts to wonder if they’ve been focusing on the wrong person and someone else could be their killer. Between trying to put the pieces together or what is actually happening, Megan takes a journey back to her own troubled past. Not going to sugar coat it, but the more she listens to the tapes from her former psychiatrist, the more questions you will have.
Snow Creek is actually a pretty twisted story that makes you compare this book to Deliverance. Haven't seen Deliverance yet? Rent it! While Megan is trying to maintain a sort of dual existence between the past and the present, you get the feeling that she really had a whole lot of help hiding what happened to her in the past in order to become a Cop. Megan and her brother no longer speak thanks to her own actions. She doesn't speak to her mother who she hasn't seen in years, and I don't think she has any intentions of doing so any time soon.
I definitely plan on continuing with this series as the book ends on a curious cliffhanger ending.