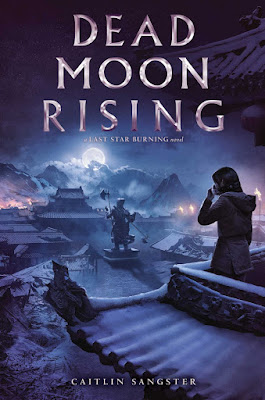 Sev must decode her mother’s last words to find the cure to Sleeping Sickness before Dr. Yang can use it to blackmail the world into submitting to his rule in this thrilling finale to the Last Star Burning trilogy.

Sev finally knows where to find the cure to Sleeping Sickness. The only problem is that she’s trapped in an endless sleep herself after refusing to give up her secrets to Dr. Yang.

Howl is determined to save Sev, but he has no idea where Dr. Yang is keeping her. When he runs into a group fleeing Port North on a mission of their own, he has no choice but to follow and hope they can get him back to the mountains before it’s too late.

June, infected with SS by the very people she calls family, has now become the one thing she most fears. She’s supposed to be Port North’s insurance that Howl and Sev return with the cure, but June has other ideas.

And Tai-ge, reunited with the Reds, is airlifted to the City now overrun by SS. He’s charged with getting the factories running again by any means necessary—no matter how many Sephs stand in his way.

There’s only one thing strong enough to unite people who have been fighting for years, and Sev holds the key to it inside her mind. If she can’t reach the cure in time, there may not be anyone left to save.

Caitlin Sangster's Dead Moon Rising is the third and final installment in the authors Last Star Burning trilogy. The series is an intricate strategy game set in an Asian-themed post-apocalyptic world and based somewhat on Mao's Communist ideology. The story begins right where Shatter the Suns left off but instead of just telling Sev's story, there are now (4) main characters; Jiang Sev, Tai-Ge, June, and Howl. Trapped in an endless sleep by Dr. Yang because she refuses to cooperate with him, Sev now knows where to find the answer to curing Sleeping Sickness.

Readers have brief hints at what is happening to Sev while the rest of the world has moved on without her. She's also visited by characters who finally admit that Sev's mother wasn't the villain she's been portrayed. She also knows that Yang and the Chairman intentionally kidnapped people from Port North in order to work the farms. Now that Sev has lost her entire family, it is the family she's made along the way like June and Howl that she deems important enough to save. The author eventually finds a way to reunite Sev with June and Howl and other Menghu who have been fighting the city.

But, in the meantime, Tai-Ge, who found Sev's mothers device and promptly gave it away, now finds himself promoted his mother the General and given the job of fixing the problems with the city. With the city overrun by those with the Sleeping Sickness, Tai-ge realizes that sometimes extreme results require extreme solutions. He's hounded by a Menghu spy while he tries to help his people. Tai-Ge who was one Sev's best friend, now knows there's no way she will ever forgive him his transgressions against her. He can try to fix things, but any likely romance with Sev has been buried until his betrayals. Tai-Ge and Mei, a Menghu, actually spend a lot of time trying to come to solutions even if the solutions mean betraying his own Reds.

Howl bitten by a gore, abandoned by Sev, immune to the SS, keep locked up for 23 days, is determined to save Sev from herself. He has no idea where Dr. Yang is keeping her, but when he discovers a group fleeing Port North on a mission of their own to find the Chairman's son, knows he has no choice but to follow and hope they can get him back to the mountains before it’s too late. Howl spent 2 years pretending to be the Chairman's son, but now there people who would be happy if Howl disappeared before he can find Sev. Howl has been taken by Sev who believes there's always a non-violent solution to every obstacle. But, will his own arrogance and stubbornness doom the relationship?

June, infected with SS by the very people she calls family, has now become the one thing she most fears the most. The one thing that took her father from her. She’s supposed to be Port North’s insurance that Howl and Sev will return with the cure, but June has other ideas. June and Loukai end up working together for most of the book, and then it becomes an all out melee in an attempt to stop Dr. Yang and finding the cure before it's too late to save Sev from being experimented on by both sides looking to save their people.

I absolutely have no issue with having 4 characters telling the final story. After all, how can Sev know what's happening to June, Howl, and Tai-Ge when she's been in hibernation for 4 weeks? Dead Moon Rising manages to continue compelling plots with lots of fast-paced action, plenty of unexpected twists, and moral dilemmas for each character to overcome. The characters are forced to examine their lives and beliefs and who they were and wanted to be. The end lags a bit, but everything is wrapped up nicely so you aren't left hanging.

THEY SAY TO FIND A hero you can’t look to the past. Heroes from stories aren’t real anyway, and that’s what the past is, right? A story told by whoever had the biggest gun. Instead, we’re supposed to find heroes around us.

I have nowhere to look, though, because my body won’t look. It’s made of ashes and wind and dead things, nothing but an echo of a heartbeat left inside me. My life has turned into a dream, every moment I’m Asleep making it harder to remember what it was like to be awake. If there was a hero next to me I wouldn’t know, because all I can see is the dark side of my eyelids, feel the grainy sheet on the bed underneath me. The only things that change are sounds. Temperature. Right now I’m cold. I can hear the steady plink, plink, plink of fluid dripping to my IV.

The door hinge squeaks, and cool air washes over me from the hallway like a breeze from the ocean, vast as a year and deep as the sky. If my body could tense, it would, but instead I’m curled up inside my mind, waiting for whoever it is to poke or prod me. To pick up my dead weight and throw me in a burn pile, mutter ugly things into my dead ears, or touch my dead body because I can’t stop them. Whoever it is stays quiet, lurking near my bed.

You are alive, not dead. It’s a whisper at the back of my mind, crumpled like a wet sheet of paper. Just like the princess in our story. Asleep until someone kisses you awake.

I wish I could grimace, because that’s not the only ending I’ve heard to the sleeping princess’s story. Also, I don’t want anyone in Dr. Yang’s base to kiss me, thank you very much.

The person prowling in my room sits in what I think must be a chair, the legs squeaking under their weight. I hear quick, nervous breaths that are free of a gas mask’s rusty tang. The bit of me that’s still awake braces for violence or worse. No mask means SS now, and SS is a beast that I don’t have the muscles to fight anymore.

“We’ve done everything you asked.” A muffled voice filters through the closed door. Helix, my brain supplies. The Menghu who killed June’s father. The person invading my room bolts up from the chair, footsteps padding to the far side of my bed away from the door. “There isn’t enough Mantis to last us much longer.” Helix’s voice grows louder, though it’s still attempting a respectful tone. “You promised—”

“Don’t argue with me, Captain Lan.” That’s Dr. Yang. The door opens again, his footsteps tapping in, probably here for my weekly checkup. I think it’s weekly. Maybe it’s daily, and I’ve only been lying here for two days. I can’t tell.

He pauses inside the room. “Aren’t you supposed to be sending orders to Dazhai?” Not speaking to me, because he knows I cannot answer.

The intruder by my bed doesn’t move for a good thirty seconds. But then the sound of army boots on concrete rings out as they leave my side and walk out the door.

Eight years my mother survived this. Eight years she listened, keeping her mind awake so she’d be able to pass on the possibility of curing SS. I’m like her, I guess. Dr. Yang put me to Sleep for knowing the truth too. That the note Mother left me in the device we found at Dazhai wasn’t gibberish. It was a clue telling me where to find the cure.

“Medicine is an exact science.” The doctor is speaking again, vague amusement at my unauthorized visitor melting away to leave only clinical precision. “You’ll have to trust me, Helix. I promised you a cure, but you and your soldiers will have to be patient.”

He can’t get the cure. Not unless I tell him where Mother hid it. The tiny living part inside me raises her head, listening to Helix’s silence. It’s heavy. A waiting silence that could end in death or destruction or maybe a cup of tea. It’s hard to tell. All I know is Helix doesn’t ask any more questions.