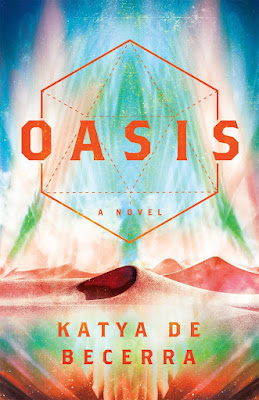 This YA supernatural mystery strands a group of teens in the desert, where an oasis saves them. But who will save them from the oasis?

Alif had exciting summer plans: working on her father’s archeological dig site in the desert with four close friends . . . and a very cute research assistant. Then the sandstorm hit.

Their camp wiped away, Alif and the others find themselves lost on the sands, seemingly doomed . . . until they find the oasis. It has everything they need: food, water, and shade—and mysterious ruins that hide a deadly secret. As reality begins to shift around them, they question what’s real and what’s a mirage.

The answers turn Alif and her friends against each other, and they begin to wonder if they’ve truly been saved. And while it was easy to walk into the oasis, it may be impossible to leave.

"Welcome to the oasis, where sand is life and nothing is as it seems."

Oasis, by author Katya de Becerra, is the authors follow up to her debut novel What the Woods Keeps. Alif Scholl and four of her friends (Lori Bradford, Minh Quoc, Luke Stokowski, and Rowen Syme Jr) choose to spend a summer with her archaeologist father Andreas Scholl in the Dubai desert. There she is hopeful of meeting her crush Tommy Ortiz who is her father's research assistant. Unforeseen circumstances, as well as bad luck or horrible curses, have caused a rift among workers which has affected logistics.

When someone wanders in from the desert raving about a trove of treasures and curses people mostly ignore him. The man apparently is a French tourist who disappeared 2 years ago. His friend is still missing. After a sandstorm destroys their camp, Alif and her friends, plus Tommy, are all swept away to the middle of the desert. They wander for awhile afraid that they’re going to die from lack of water or food necessary to survive the brutality of the desert. There's also no sign of anyone coming to rescue them.

To the point of giving up, the group stumbles upon an Oasis in the middle of the desert. This is where things get a bit strange. While they seem to be saved by the food, water, and shelter, they end up entangled in a mystery while questioning if the oasis is actually an illusion or an alternative reality. It soon becomes apparent that there may be no way to actually leave the Oasis and return to civilization. As the friends struggle to hold their friendship together that has already been torn to the point of not going back, it seems other factors are involved that are actually attempting to tear them apart permanently.

Then, people in 4x4's drive by without actually seeing the Oasis. The group can see their rescuers, but the rescuers can't see them leaving them with little hope of getting out. Alif has dreams about a Queen of Giants. Lori claims she heard talk about a sacrifice needed to leave the Oasis. One of the group ends up dead (no spoilers!). Lori and Alif both find a connection to a Tablet found in a cave that gives them twisted visions. After being in the Oasis for what appears to be 4 days, and believing that one of their own was a sacrifice to the Queen of Giants, the group suddenly finds themselves back in the world.

They are called the Dubai 6 by the media and flown home to Australia. But, they also brought back a piece mysterious tablet that seems to have a mind of its own. Let me just get this out of the way. If you like books that are creepy, weird and leaves you feeling strange about what you just read, you should definitely read this book. I've had this Twilight Zone feeling about the book and the ending since I finished the book almost 2 weeks ago. The ending tore my feelings into pieces. Just when I thought I had things figured out, the author hit me over the head and said, sorry not sorry, but that's not the way I want to end this book!

The author posted this to her Goodreads page. "Oasis is my love letter to archaeology, deserts, and genre-bending adventure horror."