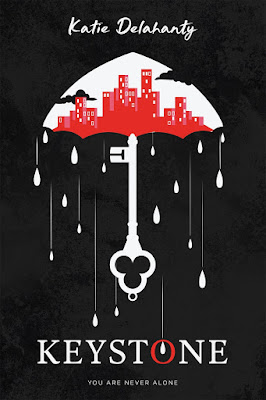 Black Mirror meets Ally Carter in this futuristic tale of social media gone bad, and the teens determined to save the world from ruin.

When Ella Karman debuts on the Social Stock Exchange, she finds out life as a high-profile "Influencer" isn't what she expected. Everyone around her is consumed by their rankings, in creating the smoke and mirrors that make them the envy of the world.

But then Ella’s best friend betrays her, her rankings tank, and she loses—everything.

Leaving her old life behind, she joins Keystone, a secret school for thieves, where students are being trained to steal everything analog and original because something—or someone—is changing history to suit their needs.

Partnered with the annoyingly hot—and utterly impossible—Garrett Alexander, who has plenty of his own secrets, Ella is forced to return to the Influencer world, while unraveling a conspiracy that began decades ago.

One wrong move and she could lose everything—again.

Katie Delahanty's Keystone is first of three books in a yet to be named series. The book is reminiscent of Bryce Dallas Howard's Black Mirror episode called Nosedive. The story alternates between the years 20x4 and 20x5 where Ella is debuting on the Social Stock Exchange with a very high debut price. Ella Karman's life was dependent on being an Influencer. She wore a Life Stream that followed her everywhere she went. The more people talk about you, the higher your rating. Things seemed to be going well until she's betrayed by her best friend.

During her own birthday party, Ella feels as though something is wrong and jumps overboard just as the yacht explodes. Did her parents intentionally try to kill her to rid themselves of the embarrassment? After all, they had the most to lose when the secret of her birth goes public. Luckily, thanks to Ella's own intuition (she is able to perceive correct information about a person or a situation rapidly), she escapes and joins a group known as Keystone. Keystone changes her name to Elisa Dewitt.

Keystone are all Disconnected from the world. They intentionally cover and mark their faces so that facial recognition doesn't catch them. Their main mission is to steal analog history and to preserve the truth corporations and governments are trying to hide or alter forever. There is a third category called Unrankables. These people are mostly unemployed, unmotivated poor who live off handouts. One could say that there still are quite a bit of prejudices that exist in this world.

Elisha trains mostly on her own but also with the help of Allard who recruited her. She quickly learns Morse code, lock picking escape and evasion, and using ciphers to break codes. Elisha's major competition and irritant is Garrett the son of Whitney & Jeff Alexander who run Keystone. Elisha also must not finish last in a brutal obstacle course challenge that will see the last place finisher sent to Keystone Farms where they likely won't ever return and have no hope of participating in this years Keystone Quest where, if she is successful, she will help someone more experienced.

While Elisa and her crew are participating in the Keystone Quest, there's lots of secrets that come about Ella Karman and those who she has been in contact with. Her very existence makes her highly desirable by some powerful people thanks to the way she was born. This book literally begins with a bang, and ends on a wicked cliffhanger. It's a good thing the author plans on writing 2 more books. The ending leaves much room for questions as to what really happened at the end of the heist.

Thank you to the author for answering my questions on Twitter!

*I voluntarily read this book without any obligations of writing a review. My review is based on my observations and notes and not on expectations by the author or anyone else.*