#Review - Sins of the Son by Linda Poitevin #Fantasy #Paranormal 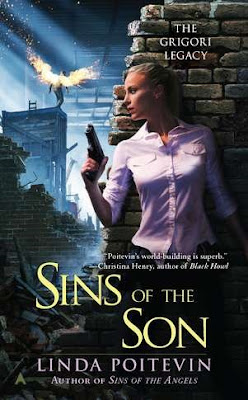 When homicide detective Alexandra Jarvis sees a photo of Seth Benjamin on a police bulletin, she knows that Heaven's plan to halt Armageddon has gone terribly wrong. As the only mortal who knows of Seth's true nature, only she can save him. Aramael was a hunter of Fallen Angels until a traitor forced him into earthly exile. Now, with no powers and only a faint memory of Alex, his mortal soulmate, he will stop at nothing to redeem himself-even if it means destroying Seth in the name of the Creator..

Sins of the Son, by author Linda Poitevin, is the second installment in the authors Grigori Legacy series. The cast of characters who the author features are Alexandra (Alex) Jarvis a Homicide Detective who is dealing with the fall out of learning that Angels really do exist and the fact that her soul mate is an Angel; Aramael, former Power stripped of his powers by Mittron after killing his brother. He's also Alex's soulmate; Seth, called the Appointed, who chooses to transition to an adult mortal but with all of his powers still in tact. Seth was last seen saving Alex's life.

In the aftermath of the events of the first installment, Alex has been put on cold cases. She was badly injured but saved by Seth. She can't go back to work until she is cleared. She tries to cope on her own and becomes even more withdrawn from her family and colleagues as she doesn't want to worry them and open the gate on her unresolved feelings. She's also dealing with what Aramael did that has set off a war between Heaven and Hell with humankind as the losers. After learning about Seth Benjamin turning up in Vancouver, Alex finds a way to travel there in order to investigate what happened and why he is here without his memories.

The book also has new characters since this is a new setting. The primary characters are Dr. Elizabeth Riley, and Detective Hugh Henderson. The pair are dealing with a wide variety of strangeness. From women turning up pregnant claiming they never had sex, or had sex with a boyfriend who was apparently not their boyfriend. What's even more curious, the babies are killing their own mothers when they are born. This is not just a local issue as we will learn. This is happening world wide as part of Lucifer's plan. They also have to investigate who Seth really is and why he has no memories.

Seth is the key character in this book. Seth made the absolute sacrifice: he forsaken his immortality, his destiny, his place in Heaven to come to Earth. The only problem is that there was a glitch in the system and he forgot absolutely everything! Seth is now loose in the mortal world with his powers but without his memories. His survival will have serious consequences on which direction the war between Heaven and Hell takes. Why? He's the son of the Creator of life, "The One" and of Lucifer, the Fallen Angel. Seth will determine what role to play in the game between heaven and earth, and which side he will eventually take. It becomes apparent that Alex and Seth are to be connected at least for maybe one more book.

I can't see this series ending any other way but with Seth and Lucifer allied against humankind as well as the One and those like Verchiel and Mika'el the Archangel who appears in this story as a sort of general moving pieces around in order to counter the One's stupidity over the past thousands of years when it came to Lucifer. Mika'el aka Archangel Michael has been very unhappy with the One for millennia. He decides that it will be the Archangels to set the parameters of the war. He decides that Aramael will be one of his chess pieces whether he likes it or not.

Sins of the Son is a much broader scope of a story than the previous installment. It focuses on the bigger picture that a war is coming and it's only a matter of time before all chess pieces are in their proper place. The reason for my rating is that there is a rape scene towards the end of the book that affects Alex and her actions after-word. I can not say this enough, but authors need to stop with the rape scenes. Lucifer actually appears in the story more this time around. He is using abominable ways to reach his goal of the annihilation of human kind. And, thanks to the One, he might just succeed.

It goes without saying, but I'll say it anyway, you really need to read these books as they were released. This story is a continuation of Sins of the Angels. This series is quite dark as I might have mentioned above. I am absolutely Ok with dark books as long as they don't use rape as a prop. Hoping to finish the next 2 books in this series over the next few weeks.