#Review - Tears of Frost by Bree Barton #YA #Fantasy 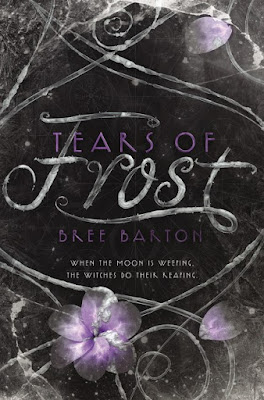 
The follow-up novel to Bree Barton’s feminist fantasy, Heart of Thorns, follows Mia Rose as she travels to the snow kingdom to unearth the dark secrets of her mother’s past and fights against the persecution of women who have magic.

Mia Rose is back from the dead. Her memories are hazy, her body numb—but she won’t stop searching. Her only hope to save the boy she loves and the sister who destroyed her is to find the mother she can never forgive. Pilar is on a hunt of her own. Betrayed by her mother, and plagued by a painful secret, she’s determined to seek out the only person who can exact revenge. All goes according to plan . . . until she collides with Prince Quin, the boy whose sister she killed.

As Mia, Pilar, and Quin forge dangerous new alliances, they are bewitched by the snow kingdom’s promise of freedom and opportunity. But with the winter solstice drawing near, they must confront the truth beneath the glimmering ice, as lines between friend, foe, and lover vanish like snowflakes on a flame.

Tears of Frost, by author Bree Barton, is the second installment in the authors Heart of Thorns series. The key characters in this book are Mia Rose, Pilar d'Aqila, and Quin Killian. Mia is being hunted by her own sister Angelyne after she stopped her own heart & was brought back to life. She is numb and no longer has an emotions. She hopes that if she can find the mother who betrayed her, she might find the answers to her condition as well as stopping her sister before she gets too powerful.

Pilar escaped Angelyne's enkindlement and is on a hunt of her own. Betrayed by her mother, Zaga, and plagued by a painful secret, she’s determined to seek out the only person who can exact revenge. The one called The Snow Wolf who also happens to be her father. Quin, who has lost his entire family, is one of those characters who is pretty discombobulated. Truly, except for finding a connection to Pilar, and his role at the end of this book, he's really an after thought.

Mia, as we discover, is something of a martyr. She was smuggled from the River Kingdom, betrayed by her sister, and now called Angel of Ashes in Luumia. Along her journey to find answers and her mother Wynna, she comes across some interesting characters like Zai, and Nelladine as well as Lord Kristoffin who has given Luumia a bright future no longer dependent on any other country to support them. They are the first to harvest self-replenishing source of power. But, at what cost?

Pilar ends up traveling with Quin for most of this story. She ends up at the Snow Queen's palace where she and Quin end up living their worst memories. For Pilar, her worst memory is killing a woman who would have been the Queen of the River Kingdom were it not for Angelyne and Zaga's machinations. What's most curious about this entire story is that nobody really asked Quin what his purpose was. Is he a puppet of Angelyne's? Is he attempting to take back power and his life at the expense of Mia and Pilar?

The most shocking revelation of all finds that Mia and Pilar have more in common that they could ever believe. It will be curious as to how the finale plays out with Mia and Pilar being given a choice to either join with Angelyne, or fight her ever growing powers. The story begins with a letter from the author regarding abuse and depression. If for any reason you need to read this book, please don't skip over the beginning.
This series focuses on a  society in which women's bodies and potential for magic are shunned and punished. The expansion of magic from oppressed women to all oppressed peoples.

I liked how the Addi also possessed magic, regardless of gender, how their oppression worked similarly to the oppression of women. With Angelyne making moves that seem to encompass the rest of the world as well, it will be interesting to seeing the new societies and characters to come. Quin has been set up to become a villain in the next installment. Why? Because he's a man who doesn't have empathy for women? Not sure if that is what's going to happen, but Quin has all but been ignored and pushed around by almost everyone in this series.