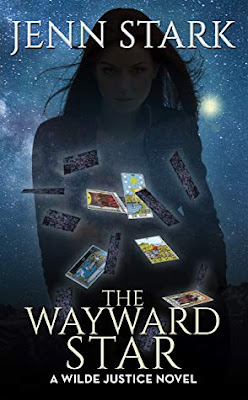 Only in darkness can you see the stars...

As the Tarot incarnation of Justice, tracking down the outlaws of the psychic community and delivering them to Judgment is Sara Wilde’s business...and business is good.

Now a rival syndicate known as The Shadow Court seeks to impose their own brand of justice, restricting magic to only the richest and most influential psychics, while stripping power from all the “undesirables” along the way. Their top priority? Hit Sara Wilde, guiding light of psychics everywhere, where it hurts…

Right in the heart.

From the crackling fires of Burning Man to Sara’s even more incendiary high school reunion, the path is never more twisted than when you follow The Wayward Star.

Jenn Stark's The Shadow Court, is the Fifth installment in the authors Wilde Justice series. One should have some familiarity of The Shadow Court before jumping into this book since they are connected. Tarot Card reading, artifact hunting, Justice of the Arcana Council, Sara Wilde is tasked with taking out the most dangerous magic-wielding criminals on the planet. But, since the discovery of The Shadow Court, Sara and the Arcana Council are now playing 150 years worth of catch-up. Which means that Sara is as busy as a porta potty at a chili eating contest trying to find answers.

As the story opens, Sara and Nigel Friedman are briefly back together after Sara accepts an invitation from an excessively rich psychic power couple Count Augustine Odermatts and his wife. Sara & Nigel are here searching for two things: Nazi artifact cubes that are radioactive. If triggered, they could create a metaphysical blast that would see untold numbers of Contecteds loose their abilities. According to Simon, a high number of connecteds are assembling storehouses of magical gadgets.

Plus, there's a virtual who's who of connected glitterati at this party which means the Shadow Court may be here as well. If Sara can suss out the Shadow Courts allies, rivals, and nemesis, then maybe the Arcane Council has a fighting chance of taking them down. If Sara, as the face of the Council, can find allies from secretive ancient families who have been targeted by the Shadow Court for elimination but are now reaching out to the Arcane Council for help, they could stop their diabolical attempt at ridding the world of those who the Court believes are insignificant to hold magic.

This story also spotlights Burning Man. For those like me who didn't know, Burning Man is an event held annually in the western US at Black Rock City, a temporary city erected in the Black Rock Desert of northwest Nevada, approximately 100 miles north-northeast of Reno. Sara is temporarily reunited with someone who she met as a 17-year old runaway after her foster mother was killed. It's all part of a larger, much grander scheme that the Shadow Court apparently has for Sara which goes back to when Sara helped find missing people with her tarot cards.

If that weren't enough stress, Sara receives an invitation to her 10 year H.S. reunion. This feels like the perfect storm for Sara since none of her former classmates know anything about this new Sara who once was Sariah Pelter. Sara knows that if she doesn't attend, innocent people will be killed. It's clear as day that the Shadow Court is playing a game with Sara. They are showing off all the cards they are holding in an attempt to bring her down, or bring her to their side.

As some of you might remember, most of this current trouble began when Sara awakened old, dormant magic while fighting the Gods who tried to break through the barrier keeping them from entering Earth. Although it hasn't been mentioned much lately, demons still causing a huge problem on Earth, including in this reunion. In a surprise move which I 100% support, the author brings in Warrick, Sebastian, Finn and Hugh who are Demon enforcers. These men appear in the authors Demon Enforcers series.

Maybe that's a sign of things to come in upcoming sequels? We shall see. Now, as a matter of this thing that is happening between Sara and Armaeus, let's just say that they might have had a break through of sorts. Yes, he still has no memories of her, but there is definitely a high octane sizzle going on whenever they kiss or are around each other. After a book without any kissing, this book has its fair share of it.