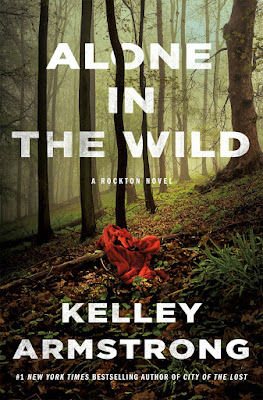 In #1 New York Times bestseller Kelley Armstrong's latest thriller, the hidden town of Rockton is about to face a challenge none of them saw coming: a baby.


Every season in Rockton seems to bring a new challenge. At least that's what Detective Casey Duncan has felt since she decided to call this place home. Between all the secretive residents, the sometimes-hostile settlers outside, and the surrounding wilderness, there's always something to worry about.

While on a much needed camping vacation with her boyfriend, Sheriff Eric Dalton, Casey hears a baby crying in the woods. The sound leads them to a tragic scene: a woman buried under the snow, murdered, a baby still alive in her arms.

A town that doesn’t let anyone in under the age of eighteen, Rockton must take care of its youngest resident yet while solving another murder and finding out where the baby came from - and whether she's better off where she is.

Alone in the Wild is the Fifth installment in author Kelley Armstrong's Casey Duncan/Rockton series. This story takes place 6 months after Watcher in the Woods. It is December in the Yukon where Rockton is located. Rockton is a town of fugitives and those running from something. Detective Casey Butler and her lover Sheriff Eric Dalton have 2 whole days off to themselves and of course, Storm their Newfoundland dog who has grown into quite the tracker. Of course, that's when Casey hears the cries of a baby. A baby? Here in the Yukon? Nobody under 18 is allowed in Rockton, so why is there a baby here?

Casey's investigation leads her to a woman who is deceased and a baby that isn't much older than a month. Who is the woman? Is she from one of the settlements? Or, could she be one of the hostiles that Casey and Eric have been warning the council about for months now and been ignored? This might be the most personal story for Casey that the author has written to date. If you've read this series from the beginning, you know that she had a extremely bad encounter with evil 14 years ago which left her in really bad shape. Her secret gave her the ability to take the job in Rockton.

Casey's affection for the baby really shows another side to her that we haven't seen before. It's actually painful because there is almost no chance that she can have one herself. Casey and Eric get busy trying to take care of the baby, who now is the youngest person in Rockton, while also trying to find out who killed the woman, while also trying to find the baby's parents and decide if she should be returned to them. I dare say that this is also a personal issue for Dalton as well since, sorry for the spoilers, he was taken from his parents and raised in Rockton. He's never quite forgiven the Dalton's for what they did to him while leaving his brother Jacob to fend for himself.

As Casey and Eric continue to investigate the crime, readers get a chance to see two separate of the settler encampments which were former Rockton residents who chose the Yukon instead of returning South. Casey has long wanted to know more about the hostiles who threaten the town of Rockton and she also gains some information about them during this investigation. Casey & Eric's relationship has actually turned a bit steamy recently. Casey and Dalton’s story has a lot of emotions involved when they are spending time with this baby. If actually forces them to confront their feelings about family and their future.

Serious question: Am I the only one tired of the whole council story? I want Casey and Eric to uncover what is really happening and why they seem to care more about making money than what is happening. Also, I still don't fully trust Petra since she has a very twisted background which I won't spoil. Where do her loyalties lie? With Rockton or the Council? Will we ever meet the Council? I think the most interesting outlier character in this book is Maryanne. She reveals quite a lot about the so called hostiles and how she became one and later escaped from them. She may hold a whole lot of answers so Casey & Eric can prevent any escalation of conflicts that are soon to come.

If you haven't started reading this series yet, the first 3 books were pretty much self-contained. Watcher in The Woods and this book now paint a larger picture and have had interwoven threads.