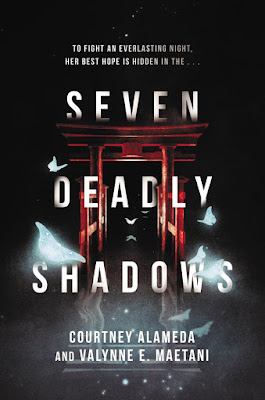 Fans of Six of Crows will devour this riveting contemporary YA retelling of Akira Kurosawa’s Seven Samurai.

Seventeen-year-old Kira Fujikawa has never had it easy. She’s bullied by the popular girls in school. Her family ignores her. And she’s also plagued with a secret: She can see yokai, the ghosts and demons that haunt the streets of Japan. But things accelerate from bad to worse when she learns that Shuten-doji, the demon king, will rise at the next blood moon to hunt down an ancient relic and bring the world to a catastrophic end.

Not exactly skilled at fighting anything, much less the dead, Kira enlists the aid of seven powerful death gods to help her slay Shuten-doji. They include Shiro, a kitsune with boy-band looks who is more flirtatious than helpful, and O-bei, a regal demon courtesan with covert reasons of her own for getting involved.

As the confrontation with Shuten-doji draws nearer by the day, the fate of Japan hangs in the balance. Can Kira save humankind? Or will the demon king succeed in bringing eternal darkness upon the world?

"I am a girl surrounded by monsters and ghosts from an ancient world. Most days, they scare me less than people do."

Seven Deadly Shadows is a retelling of sorts of Akira Kurosawa’s Seven Samurai by co-authors Courtney Alameda, and Valynne E. Maetaini. 16-year old Kira Fujikawa is an outcast at school, but training to be a priestess at her grandfather's Shinto Shrine. Kira and her family have tended to the Fujikawa Shrine for nearly one thousand years. She is the only one in her immediate family who has the ability to see the otherworldly beings called yokai demons around; it seems the gift skipped from her grandfather directly to her.

This has her at odds with her parents and family tradition, the latter of which she is intensely proud to be a part of. Everything changes the night shrine is destroyed by yokai demons and her grandfather is murdered by demons looking for a hidden piece of the fabled Kusanagi-no-Tsurugi sword.  Kusanagi-no-Tsurugi is a legendary Japanese sword and one of three Imperial Regalia of Japan said to be made by the Sun Goddess Amaterasu. Historically, this sword has never been seen in public. Only artist renditions of what the sword looks like can be found.

If Shutin-doji finds the last shard and puts the sword together, he will not only kill the Sun Goddess, but sent the world into forever darkness. With Shiro, a Kitsune shrine guardian alongside, Kira sets off on a path of revenge for her grandfather that will take her to Tokyo. Kira makes a deal with Lady O-Bei of the Twilight Court for help. All she has to do is find 7 Shinigami death gods and the missing shard of a powerful shard. All while going to school and being a dutiful daughter.

Kira Fujikawa has always felt like an outsider. Between being able to see the deadly yokai that live amidst normal mortals and being bullied at school, the only safe place Kira has is at the temple her family owns and her grandfather runs. But, as the story rolls forward, Kira finds her own way and her own strength. Kira and Shinigami, which include Shiro's brother Ronin, and Roji a former samurai who takes Kira under her wing and teachers her own to fight, and how to survive. For some readers, there was this outrage that Kira is some sort of snowflake who can suddenly find a way to defeat a power Demon and his followers.

However, there is more to the story than that and you should definitely pay more attention to Kira's descendants and the fact that her grandfather and others knew that Kira would be the one to face ultimate terror and danger. While this novel includes supernatural characters and could be shelved in fantasy, the heart of the story is about a girl finding out—and embracing—the truth about herself. She goes from an outcast with no self-confidence to a world-saving heroine who has managed to get seven unruly demons to follow her lead. She learns to trust herself, trust in herself, and embrace the quirks that set her apart from everyone else.

Despite not being familiar with the source material, the story was entertaining enough to keep my focus and attention. It may sounds curious to you, but I actually love stories that feature Japanese mythology and culture. Japan is filled with centuries old stories and characters that remain strong even today. The religion of Shinto is a big part of Japanese culture. I also appreciated that Alameda made a pilgrimage to Japan in order to take in the setting and the cities, Kyoto and Tokyo, where this story is set. I am also thankful for the glossary at the end of the book!