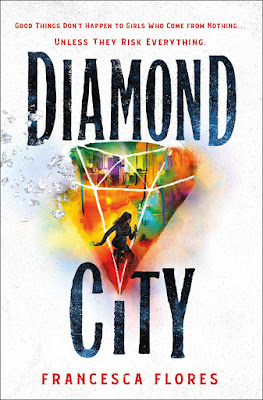 Diamond City is an action-packed young adult fantasy by debut author Francesca Flores about a girl who perseveres through poverty, violence, and loss to achieve a future for herself.

Good things don't happen to girls who come from nothing...unless they risk everything.

Fierce and ambitious, Aina Solís is as sharp as her blade and as mysterious as the blood magic she protects. After the murder of her parents, Aina takes a job as an assassin to survive and finds a new family in those like her: unwanted and forgotten.
Her boss is brutal and cold, with a questionable sense of morality, but he provides a place for people with nowhere else to go. And makes sure they stay there.
DIAMOND CITY: built by magic, ruled by tyrants, and in desperate need of saving. It is a world full of dark forces and hidden agendas, old rivalries and lethal new enemies.
To claim a future for herself in a world that doesn't want her to survive, Aina will have to win a game of murder and conspiracy—and risk losing everything.
Full of action, romance and dark magic, book one of this breathtaking fantasy duology will leave readers eager for more!

Diamond City is an action-packed young adult fantasy by debut author Francesca Flores about a girl who perseveres through poverty, violence, and loss to achieve a future for herself. 18-year old Aina Solis is an assassin who works for Kohl Pavel, aka the Blood King who saved her life when she was 12 and made her his Blade. She's at the top of her game working towards her freedom to work for herself. When she is offered the job of a lifetime that will finally set her free from Kohl, she jumps at her chance.

All she has to do is kill Kouta Hirai: one of the most prominent Steels in the city. She enlists the assistance of her only friend Teo Matgan, a fellow assassin, and does what Aina does best. She gets the job done. But when Aina discovers that Kouta has miraculously survived by magic forbidden in Solís, everything she has ever worked for is ripped from beneath her feet. The Blood King rescinds his protection, his favor, her money, and gives her one week to clean up her mess...or else. Before Aina knows it, she has a large bounty on her head and every one with a grudge or who has lost someone thanks to Aina is quickly on her heels.

Aina must rely on the very last person she would have ever expected to track down Kouta - his brother, Ryuu. With the help of a growing & diverse crew, Aina soon realizes that there is more at stake than her own life. With Teo, Ryuu and Raurie Coste on her side, Aina must uncover deep, dark secrets that seem to include her mentor, her friend, and her idol, Kohl as well as her focused enemy General Bautix. She has find where Kouta is before Kohl and his allies reach him first. As Aina and her crew work towards finding Kouta, they discover even more shocking secrets that may cause ripples in the country for years to come.

Aina struggles often in this story. The last 6 years of her life have been conditioned to believe one thing, only to be blindsided by power, money, and dangerous alliances. Aina's story is about the difference between healthy love and toxic love, about learning to fight for something bigger than yourself, and about giving a voice to the poor.  I'm adding a key character description I found via the author who I give full credit for this section of my review:

Aina - Fierce, ambitious, and rebellious. She’s as sharp as her blade and as mysterious as the blood magic she protects. An eighteen-year-old orphaned assassin with a bounty on her head after succeeding but ultimately failing to kill her target that would give her freedom. To survive, she will stop at nothing and let no one get in her way—for if they do, they’re dead.

Ryuu - He may have been born with a silver spoon in his mouth but his eyes blaze with fire over the injustices in the world. Loyal to a fault, he would kill to avenge his parents death as well as save his brother from being taken away. He thrives most under pressure and has the ability to dig deep into people’s own truths.

Tannis -  Piercing eyes and blue tousled hair—don’t let her stunning features fool you into thinking she won’t kill you with her throwing stars and knives. Growing up with a less than desirable childhood, it’s hard for her to trust anyone. For this reason, she often chooses to act alone. Tannis may be the one thing Aina needs to survive everything that comes for her.

Teo - He’s a lover, not a fighter, but cross him and he will break you. You may see a criminal but he keeps his work honest, takes no handouts, and lives for his friends and his mother. Teo and Aina's relationship isn't one of a romantic one. They are close as brother and sister and have promised each other to be there for the other no matter what happens.

Kohl - He’s brutal and cold with a questionable sense of morality. Known to many as “The Blood King” he provides a place for people who have nowhere else to go. Essentially, he owns them and if you cross him he won’t give it another thought but to decimate you. Kohl is devious and has many powerful friends including a gang called Jackals who want to see Aina pay for her past actions.

Raurie - Her family is her life. When she’s not working at her uncle’s bar, she’s negotiating prices on imported liquor, and, oh yeah, her aunt uses blood magic. She’s young, pretty, can outsmart most, and will step up to the plate to defend those she cares about. Raurie doesn't run away when things get dangerous. She's around for the revelation, and will hopefully be a key part of Aina's future plans.

In closing, Diamond City has some strong worldbuilding. It's seriously incredible. It's so solid, so intricate, and so interesting. There are prisons that don't see the sunlight, underground tunnels, gangs, wolf sized spiders, mines, complicated history, and so much more.