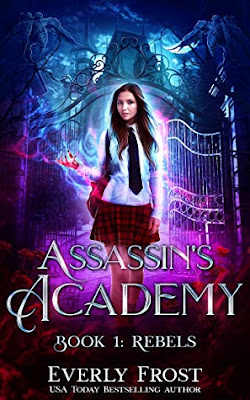 My choices are simple. I've been sent to Bloodwing Academy because I'm one of the magically repressed. I should have magical powers, but I don't. Not yet. One day I'll wake up and my powers will be out of my control. I'll be a threat to everyone around me, but that doesn't mean they should lock me up. Especially with the dangerously fierce and irresistibly gorgeous, Striker Draven. As heir to the Draven fortune, he thinks he can have whatever he wants. He wants to pull me apart, rip out my power, and take my heart with it.

That's if I don't rip his out first.

My name is Peyton Price. My freedom will come at a cost. Body and mind, I have to decide if I'm willing to pay it.

Rebels is the first book in a two part series called Assassin's Academy. This book is set in the same universe as the authors previous series Assassin's Magic featuring Hunter Cassidy and Slade Baines who make appearances in this series as well. Event's in this book, begin before the events that happen in Assassins' Maze. 20-year old Peyton Price is being dropped off at Bloodwing Academy for the magically repressed by her family. It’s a school that has a one way ticket. There's no escape. The only way to leave is via body bag.

This is a school designed to try and make everyone there show their abilities in whatever way the Bloodwing teachers feel fit. The running theory is that with fear that’s when powers show and they really do wrap their hands tightly around that. These teachers are insane and know no limits. On the first day she is there, Headmistress Osprey decides to try to torture Peyton with magic to see if she can figure out what Peyton is. Peyton is labeled as Unknown and shoved in the attic where the only threat to her is her next door neighbor Striker Draven.
Peyton has never once exhibited any magical manifestations even though she's past the age of those who come into their powers. Peyton's time here at the Academy isn't all fun and games, especially when Striker Draven seems to be the angriest and most dangerous person in this entire school. After being punished for something she didn't do, Peyton encounters a Harpy. Harpies transport prey to hell. They regenerate. They're strong. They're considered Class B monsters. The only beings more dangerous are Valkyrie and Keres who are not supposed to exist any longer. As we've learned from Hunter and Slade and Archer, that's not true at all.

The point of this Academy is to build an army for Lady Tirelli who you would have met if you read the previous series. The Unknowns are the strongest and therefore shouldn't be underestimated. After Peyton kills the Harpy, those like Striker start to take her seriously. It's apparent that she's not a spy, that those in charge don't really want her to die, and that she's in as much trouble as the rest of them. Osprey wants to find out what she is and what she is capable of. Striker's beast is immediately protective of Peyton.

Nobody has ever pushed Striker like Peyton will do over the course of this story. The Unknowns are supposed to be expendable by their families. Nobody will shed a tear if they just happen to die along the way. Peyton finds some friends among the 30 students with similar stories. Lucinda, Ashley, Joseph, and Lachlan are all trying to find out what they really are and what they are capable of. The students are lied to and told that the Assassins, especially Hunter, want them dead. When Peyton's powers due finally manifest, she may be the most dangerous being in this entire academy.

The magic users who run the Academy are truly sadistic. Bloodwing is the ultimate prison with a singular goal set in stone. Beat out the hidden powers to serve a high calling. Bullies rule and using violence is encouraged. Striker is the typical tortured soul bad boy who has been trying to suppress what he is from being used by the school's leaders. He is often times found beating the crap out of someone to prevent them from being killed by the school's leaders who are always looking for an excuse. They dynamics between Peyton and Striker play out well since they are both dominate. Striker also has a plan for getting back at his step father for what he did to his mother. That is if he can find a way to escape.

The ending is wild. It absolutely sets the stage for the sequel and the end of the series.