#Review - All the Stars and Teeth by Adalyn Grace #YA #Fantasy 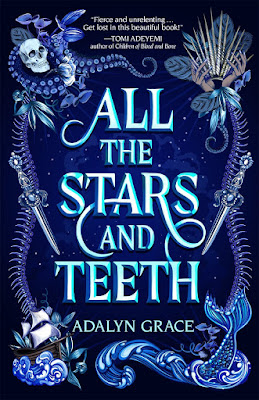 Set in a kingdom where danger lurks beneath the sea, mermaids seek vengeance with song, and magic is a choice, Adalyn Grace’s All the Stars and Teeth is a thrilling fantasy for fans of Stephanie Garber’s Caraval and Sarah J. Maas’s Throne of Glass series.

As princess of the island kingdom Visidia, Amora Montara has spent her entire life training to be High Animancer—the master of souls. The rest of the realm can choose their magic, but for Amora, it’s never been a choice. To secure her place as heir to the throne, she must prove her mastery of the monarchy’s dangerous magic.

When her demonstration goes awry, Amora is forced to flee. She strikes a deal with Bastian, a mysterious pirate: he’ll help her prove she’s fit to rule, if she’ll help him reclaim his stolen magic.

But sailing the kingdom holds more wonder—and more peril—than Amora anticipated. A destructive new magic is on the rise, and if Amora is to conquer it, she’ll need to face legendary monsters, cross paths with vengeful mermaids, and deal with a stowaway she never expected… or risk the fate of Visidia and lose the crown forever.

All the Stars and Teeth is the first installment in debut author Adalyn Grace's new duology. 18-year old Amara Montara is the Princess of of the Kingdom of Visidia. Amora has been training all her life to take on the mantle of High Animancer, a master of the soul magic that only the people in her family can wield. Visidia is made up of (7) islands each with one very specific magic; Arida (soul magic), Valuka (elemental magic), Mornute (enchantment), Curmana (mind magic), Kerost (time magic), Suntosu (restoration magic), and Zudoh (curse magic). Zudoh, though, was banished 11 years ago and will become the center of this entire story.

Amara's father is Arida's High Animancer & King who she will one day replace. That is if she can pass her public demonstration and prove that she can be trusted to become Queen. But, before her demonstration can even take place, Amara overhears a conversation between her father and Bastian Altair. It seems there is a legitimate threat to Arida from a man, Kaven, who wants to allow everyone to have more than one magic which is currently forbidden. Kaven has already collected a large army which could be a challenge to defeat.

After Amara's demonstration goes horribly wrong, she finds herself in a cell where Bastian urges her to join him on his quest to stop Kaven and save Zudoh which has been cut off and basically imprisoned. Bastian and Amara are joined by Ferrick, Amara's fiancé who has restorative magic which comes in handy a lot. Bastian is tied by a curse to his called Keel Haul. He's been bound to his ship for 11 years and calls himself a pirate. Bastian, Amara, & Ferrick travel to various islands in Visidia looking for a mermaid to help them cut thru the curse surrounding Zudoh.

They find Vataea who is able to sense curses. She has been held hostage for several years with no freedom to return to the sea. Vataea is the only hope that the crew has of entering Zudoh without being forever cursed to the Island. There's a rather large group of tertiary characters that are necessary for Amara, Bastian, and Ferrick to escape capture. Some have called them throw away characters because you see them once, and they're gone or are quickly killed off. However, Shanty, a face shifter, might be the most interesting in that she is now owed a favor by Amara.

There's a bit of romance between Amara and Bastian, but it isn't love at first sight. It's gradual. Bastian is trying to get his magic back which was taken from him by Kaven who isn't a paper-cut out villain. He's the real deal and dangerous to everything that Amara and her family stands for. He also holds some interesting secrets that turn everything upside down for Amara. Ferrick is kind of the odd duck in this story. He wants to do right by Amara who has no romantic interest in him whatsoever. He understands that she has her own path to walk where he can't go but he can be there for her when she gets in trouble. He's also a really big help when his friends are hurt as he has restoration magic. He can even regrow his own limb.

Amara is an interesting character who has the burden of the magic she bears, the love of her people, her desire for adventure on the open sea, and later, her desire to right a wrong that should have remedied by her own father years ago. She discovers that everything she thought she knew about magic was a lie. Her dad sheltered her all her life, so Amora has to come to terms with how he’s been intentionally lying to her and to the entire kingdom. Amara's magic is about the most violent magic you can attempt to control. Her magic requires the uses of blood, skin, bones, and other parts of the body. They method of obtaining these parts are often violent and torturous in nature.

Overall, I think this is a good start to the duology. I think there's just enough action and adventure to keep a reader satisfied. While there is a bit of romance, it doesn't stifle or overwhelm the story. I will be looking forward to the sequel as I really truly hate starting a series of 2 books, and then not finishing.