#Review - The Third to Die by Allison Brennan #Thriller #Suspense 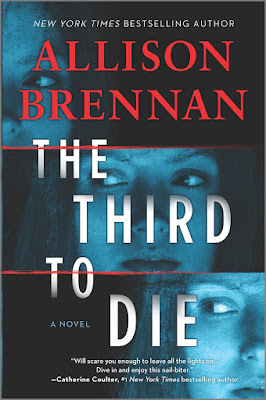 New York Times bestselling author and gifted storyteller Allison Brennan's new standalone thriller features a troubled female police detective and an ambitious FBI special agent who wind up at the center of a ticking-clock investigation into a diabolical serial killer.

Brennan's novel will launch a book-a-year series featuring a fabulous cast of recurring characters. It’s the story of a troubled female police detective and an ambitious FBI special agent who wind up at the center of a ticking-clock investigation into a diabolical serial killer; and the bond they forge in this crucible sets the stage for the future books in the series.


Detective Kara Quinn is visiting her hometown of Liberty Lake, Washington, after being placed on administrative leave by the LAPD, when she comes upon the mutilated body of a young nurse during an early morning jog. The manner of death is clearly ritualistic; she calls it in. Meanwhile back in DC, special agent in charge Mattias Costa is meticulously staffing his newly-minted Mobile Response Team. One of his first recruits is the brilliant FBI forensic psychologist Catherine Jones. When word reaches Matt that the Washington state murder appears to be the work of the Triple Killer--it will be the first case for the MRT. Jones has done the only profile on this serial killer, but she is reluctant to join the unit, still shaken by the death of her sister a year ago under circumstances for which she holds herself responsible. But only she holds the key to understanding the killer's obsessive pattern--three murder victims, three deep slashes a piece, each three days apart, each series beginning on a March 3rd--3/3, then a three-year hiatus before he strikes again.


This time they have a chance to stop him before he claims another victim strikes, but only if they can figure out who he is and where is is hiding.

The Third to Die is the first installment in author Allison Brennan's Mobile Response Team which is supposed to be a book a year series featuring recurring characters. The story takes place between March 3 & 14, in & around Liberty Lake, Washington. The main characters in this book are Los Angeles Detective Kara Quinn who has been an undercover cop for 12 years, and Special Agent in Charge Mathias Costa who leads the newly formed Mobile Response Team. MRT is supposed to go to areas where the local law enforcement is under served or have limited forensics capability.

His team currently consists of Ryder Kim (team analyst), Michael Harris (former NAVY Seal), and Jim Esteban (team criminologist. I should also add Catherine Jones to the mix since she's one of the FBI's best criminal profilers as well as being the one who wrote the profile on The Triple Killer. Catherine and Costa are friends who have been in mourning over the loss of Catherine's sister and the fact that Catherine wants to take a sabbatical or quit the FBI altogether. Costa does everything in his powers to keep her around which is a good thing since her clues and her ability to get into a killers heads is priceless to the investigation.

The book actually begins from the point of view of a serial killer whose meticulous nature and disturbing psychology are immediately apparent as he is described cleaning up after his latest crime. His main goal was revenge for wrongs he felt he suffered. He created a rather intricate plan to exact payback, which he felt would leave him clear of any repercussions. How dare the FBI get in his way before he can complete his mission! The killers plans are interrupted when HRT and Kara seemingly find connections to past murders which lead them to put into place obstacles to stop his successful hunts.

Kara is on vacation after being placed on administrative leave by her boss pending an investigation into her last case which led to a CI being killed. Kara is agitated at what happened and is itching to get back into the game. She's been a really good undercover cop for a very long time and has seen things others would shrink and gasp at. Kara soon discovers a dead body while out jogging. Kara just missed the killer by minutes. Kara doesn't know it yet, but this dead body is just the first of 3 that is suppose to happen between March 3 and March 9.

The Killer, nicknamed The Triple Killer because he always kills 3 people over 9 days every 3 years and then stops. His victims have been nurses, educators, and cops. Even though Kara is supposed to be on vacation, she's a strong, intelligent investigator, with knack for reading people, and a superb memory. She might be a bit snarky and keeps people at arms length, but her insights into the female victim added an element that Costa's team needed. She soon joins with Costa and his team trying to uncover the identity of the killer and stop him before he kills more innocents.

As Kara, Costa and cops from Spokane and the surrounding areas put their resources together, the clock is ticking until the killer strikes again. What's worse? The “Triple Killer” might be targeting someone that Kara, who grew up in this area, knows. It's also apparent that anyone close to the investigators are prime targets. “Triple Killer” has evaded capture due to his long waiting periods and victim profiles that defy easy classification. As always, whenever the FBI is involved, small town politics and jurisdictional issues arise to complicate matters.

Hopefully, Brennan’s follow up will go deeper into the development of the MRT team which apparently will be one book a year and avoid veering again into unnecessary romance which wasn't needed. I also want more background on what happened 9 months with Catherine and Matt before this story takes place. If these characters were in another of the author's series, please let us know.