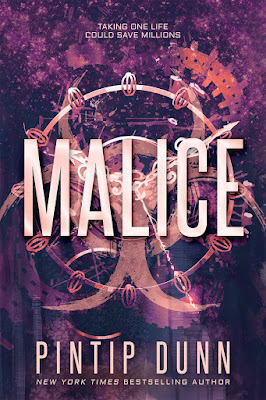 Dead Zone meets Sixth Sense when a girl learns that a boy in her class will one day launch World War III. Can she kill his still-innocent self today in order to save millions of lives tomorrow?

Could you kill an innocent life today to save millions in the future?
Seventeen-year-old Alice has spent her entire life in the shadows of her charismatic twin brother. And she's utterly content to stay there, as not taking risks means that she doesn't get hurt. Until the day a strange voice appears in her mind, demanding that she approach Bandit, the cute Thai boy in her physics class—and kiss him. Never mind that she's never spoken a word to him before.
Compelled by the excruciating pain in her head, Alice reluctantly obeys. But submitting to the voice sets off a series of bizarre demands, tasks that don't seem to follow any rhyme or reason. Determined to figure out who the voice is and what it wants, Alice hurtles into a dangerous investigation into the tangled link between the future and the present.
What she discovers shakes her to the core. Twenty years from now, a boy from her class will launch World War III, and it is up to Alice to stop him. Problem is, she doesn't know his identity. And even if she can figure out who he is, will she be able to take the biggest gamble of all: killing his still-innocent self today in order to save millions of lives in the future?

"One wrong move, one detail too many, and we could create ripples that will change the future in ways we never intended." Malice

Author Pintip Dunn's Malice is the first book in a new series, or so the author stated on Goodreads. What you need to know: 17-year old Alice Sherman dreams of one day taking pictures for National Geographic. She's quite good, actually. Her mother left 6 years ago without an explanation as to why. She lives with her father who runs a bio-tech company, and her brother Archie who is a genius as is most everyone at her High School. Then, one day a voice, who I shall call Malice for this review, tells Alice that she should tell a boy named Bandit Sakda that she loves him.

Come to find out, the voice is from 10 years in the future and she has sought out Alice to tell her that a boy in her school will one day create a virus that will wipe out two thirds of the worlds population. Malice tells Alice that she can't tell her who the person is, only that she has to figure out the clues for herself. In the meantime, Malice tells Alice things that she must do along the way which includes betraying her best friend Lalana to keep her out of the way. This a heart crushing betrayal that leaves Alice with only Bandit as her outlet.

As the future Alice gets more brazen with her requests, Alice needs to start putting two and two together quickly or else all hope is lost. The story asks the reader a haunting question: If you could stop a tragedy tomorrow, would you cause one today? The twist on the old saying if you could go back in time and murder Hitler, would you do so? There's a mystery angle to the story as well. The readers will get hints along the way in order to identity of the boy in Alice's school will one day group up to be a mass murderer. I think once you read the clues, the perp becomes easier to identify.

Alice isn't a bad main character. She's likeable and has a strong moral code which is shattered to pieces each time Malice asks her to do something. She’s taken care of her genius yet absent minded older brother, while having an emotionally unavailable father who forgets that he has two kids that he needs to take responsibility for. Bandit and Alice's connection is interesting but not rushed. They slowly tend to gravitate towards each other knowing that two heads are better than one when solving difficult mysteries that have world wide implications.

"Hope must be strongest when hope appears lost."