#Review - Off Balance by Aileen Erin #YA #SYFY 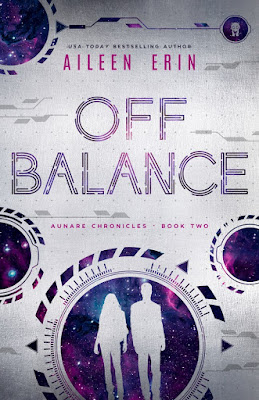 Broken, beaten-down, and plagued by nightmares, Amihanna di Aetes is surrounded by the Aunare race that makes up the other half of her heritage, but she feels alien amongst them. She’s not sure which is worse: SpaceTech’s overt hatred of Aunare or the Aunare’s covert hatred of halfers. She hears their whispers whenever she enters a room and sees her death reflected in their eyes. Amihanna doesn’t know who to trust anymore, but she hasn’t survived this long by ignoring the warning signs all around her, especially when her instincts are screaming that a familiar choice is coming: flee or fight.

Her parents assure her everything is okay—that there won’t be any reason for her to fight, let alone flee—but with Amihanna’s sudden return, questions arise among the Aunare: who should be blamed for the start of a full-scale war with SpaceTech, how much danger will the war bring, and is Amihanna truly fit to be the next high queen?

Honestly, Amihanna wants to forget all the politics, her betrothal to Lorne, and the possibility of being queen. Her needs are much more basic. All she wants is a solid night’s sleep where she doesn’t wake up screaming with the phantom pain of her skin burning. All she needs is to live without fear of a mob tearing her away from her family. All she hopes for is a chance to dream of a future instead of constantly fighting for her right to live.

Off Balance is the second installment in author Aileen Erin's Aunare Chronicles. What you should know. The beginning of this story takes place 13 years ago on Earth. Lorne knows it is time to leave Earth before Liberation Week where all Aunare will be rounded up. Earth is getting more & more violent towards the Aunare, but for some reason, 6 year old Amihanna di Aetes, daughter of Rysden and Elizabeth, is about to be left behind instead of being brought back to Aunare where she will be safe. This one mistake will cost Amihanna/Maité and her mother years of terror.
They will spent the next 13 years living on the streets, hungry, and fighting every step of the way to avoid being captured by SpaceTech who knows if they find Ami, they will have leverage over the King of Aunare as well as her own father who should be ruling. Trouble peeks for Ami when, one night, while waitressing in a greasy diner, Jason Murtah gets handsy with her. She reacts without thinking and runs. Ami is soon arrested and sentenced to a year on Abaddon, the dung heap of the galaxy where she meets Declan and Ahiga.
Fast forward to the present. Amihanna di Aetes, now 20, is on Aunare where she isn't liked and she has zero memories of the past. It has been 3 weeks since she escaped Abaddon with the help of Lorne who is apparently her betrothed but her nightmares are keeping her from doing anything logical or constructive except to hide away in her room, or spend hours every day training. Lorne needs Ami in order to take down his father who has been spending way too much money and time getting cozy with Jason Murtagh and SpaceTech.

Ami doesn't remember the people, the culture, or even the language. The media hates her, but the news isn't as big a problem as the people themselves--the ones who want her dead. Ami also has to get used to the fact that Lorne, her shalshasa, is the man whose talents and energies are perfectly balanced with her own. This story actually alternatives between Lorne and Ami. Lorne has so much to deal with. His people don't want Ami as their Queen. Ami is all but pushing him away until her nightmares only get better when the two are in the same room.

The only person Ami seems to trust is her best friend Roan who knows how much pain and suffering she's had to deal with on Earth, on Abaddon, and now on Aunare. Ami also finds that she is being used for a much bigger mission. She may be the one hope that the Aunare needs to survive an all out war with SpaceTech. Without her, all hope might be lost.
Ami has a lot on her plate, as you can tell. She faces several assassination attempts. She faces near capture by SpaceTech who are on the planet.
But, the best parts of this story for me is when Ami runs a challenge that she's never seen or trained for and finally comes out and tells the Aunare people everything that happened to her on Earth after she was left behind. This may or may not be the starting point for Ami to prove that her supposed intelligence, her ability to process problems and to strategize are not a figment of Lorne's imagination but a real tool that enemies of hers might want to think twice about before coming for her again.

Let me be honest by saying that Lorne is the character whom you will like a whole lot. He's driven, intelligent, caring and above all patient. He's in love with Ami and has been his entire life. He will do anything to protect her even if it means constantly asking her to marry him, and becoming Queen so that they can overthrow his corrupt father who has done so much damage. The relationship between the two grows slowly over the course of the story to the point where even Ami has to admit that she's his, and nothing will change that. There's even a graphic sex scene with absolutely surprised me.