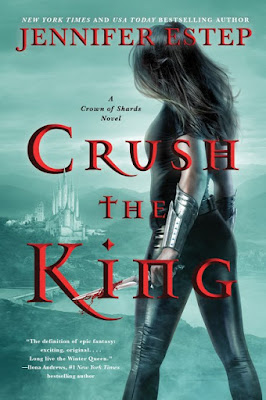 A fierce gladiator queen must face off against her enemies in an epic battle in this next thrilling installment of New York Times and USA Today bestselling author Jennifer Estep’s Crown of Shards series—an action-packed adventure full of magic, murderous machinations, courtly intrigue, and pulse-pounding romance.

Queen Everleigh Blair of Bellona has survived the mass murder of the royal family, become a fearsome warrior trained by an elite gladiator troupe, and unleashed her ability to destroy magic. After surviving yet another assassination attempt orchestrated by the conniving king of Morta, Evie has had enough. It’s time to turn the tables and take the fight to her enemies.

There is no better opportunity to strike than during the Regalia Games, a time when warriors, nobles, and royals from all the kingdoms come together to compete in various sporting events. With the help of her loyal friends, Evie goes on the attack at the Regalia, but things don’t turn out the way she hopes. Soon, she is facing a terrifying new threat, and she will have to dig deep and learn even more about her growing magic if she has any chance of defeating her foes.

Because to secure her throne and ensure her kingdom’s survival, Evie must think like a true Bellonan: she must outsmart and outwit her enemies . . . and crush the king.

Crush the King is the third installment in author Jennifer Estep's Crown of Shards series. Everleigh Saffira Winter Blair, Queen of Bellona, is preparing for the Regalia Games (similar to the Olympics and a gladiatorial contest), a time when warriors, nobles, and royals from all (7) kingdoms come together to compete in various sporting events. The Regalia Games are a (3) day affair which is hosted on Fortuna Island by the DiLucri family (Seraphine & Driscol) who own the Mint. So enters yet another player in the game who appears to have chips on their shoulders when it comes to Everleigh's reign.

The Regalia Games gives Everleigh a chance to show her true worth to those who are not yet allied with her, or may be scared of feeling the wrath of King Maximus of Mortan who has been a constant thorn in her side for months now. Making alliances while keeping a sharp eye out for Maximus isn't that easy. Maximus is powerful and cruel. Over the past year, Everleigh has survived the mass murder of the royal family, become a fearsome warrior trained by an elite gladiator troupe, unleashed her ability to destroy magic, killed a Queen, saved a Prince's life, and faced numerous assassination attempts at the behest of Maximus & his bastard sister, Maeven.

The Regalia Games is a place filled with political scheming, intrigue and one-up-man-ship in order survive and win the day.  Evie will do anything to protect her people and her nation. Thanks to her time with the gladiator circuit, Evie has made lifelong friends with Serilda, Cho, Paloma, Xenia, as well as Lucas Sullivan, the bastard prince of Andvari, who is also Evie's love interest. Maximus will do anything to maintain his power and terrify his people including his blood relatives. Everleigh is ready to play “the long game” which is a staple of her people. Everything that happens, including a few flashbacks and learning to dance a particular dance, are laying the groundwork for a greater scheme, so pay attention.

Everleigh is dodging attacks and assassination attempts around every corner. But she’s not merely playing defense this time, she shows her claws and begins to fight back. Everyone thinks that Evie is weak, but she’s about to prove them all wrong. Evie isn't a powerful magier, but she does have the ability to crush magic and that comes in handy time and time again. As I said before, there's an introduction to a new set of players who seem to be enemies of Everleigh. This, unfortunately, is a storyline that won't be resolved in this book but the author intends to write other stories in this universe. So, be it.

If you haven’t read her earlier books, I’d recommend first checking out my reviews for Kill the Queen and Protect the Prince. As I said above, Estep has plans to continue writing in the world of Crown of Shards, but it may be a different character. The ending does leave room for more to the story, so one should get disappointed in that things are left as they are.